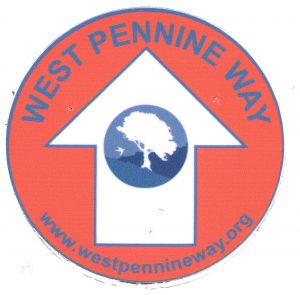 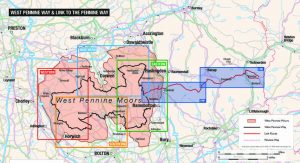 from Whalley to Manchester along the Pilgrims' Way. For detailed information on this walk click Pilgrims' Way or click the picture.

To view the Village Link website and its walks,

You can download a map of a walk and the gpx file for the walk shown on the Community Notice Board map, by clicking       Come Walking Around Greenmount 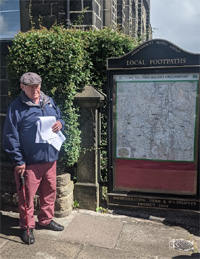 If you prefer a shorter walk click the link Shorter Circular Walks. These walks also show a map and the .gpx file of the route.

Many smartphones, tablets and other GPSMAP devices (eg Garmin Hand Held) are GPS-enabled.  Smart phones, with the right app, can be used as a navigational aid. To do this, download the .gpx file from the route page and import it to your device.

You can view or print the walk leaflets for the West Pennine Way by clicking on Walk Leaflets.

A set of these A3 size leaflets can be obtained by sending a self addressed envelope with 2 first class stamps on it to the address shown to the right.  The envelope needs to be 22cm. by 11cm.

KAY STREET COUNTRY STRIDERS is a small group of walkers based in Rawtenstall.

First of two walks to complete the Village Link Route

On yet another misty morning nineteen walkers set out from Greenmount to complete the first section of the Village Link Route. We started by walking down the Kirklees Trail as far as Shepherd Street, where we turned left and headed to Tower Farm. It is difficult to believe that such a magnificent building was built, by Samuel Knowles in 1840, as a stable and warehouse. After turning right at the tower, we continued to follow the route through Tottington Mill Wood, first crossing the bridge over Kirklees Brook, then passing several mill lodges before re-joining the Kirklees Trail. At Pickton Close we turned right and headed through the estate to Tottington Road, which we crossed and made our way onto a footpath directly opposite. The route then took us through several muddy fields, finally arriving at Owlerbarrow, where we crossed the road, and followed the footpaths into Walshaw. 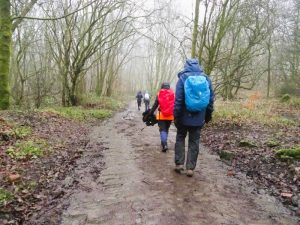 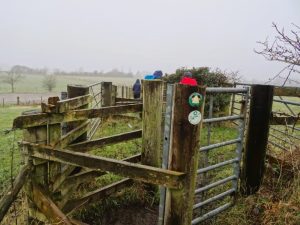 Once across the road we turned right into Slaidburn Drive, that soon became a track  which we walked along for a short distance, before turning left  and heading down to Whitehead Lodges, now called Lowercroft Reservoirs. These were built by John Whitehead around 1820 to supply his mills, in Lowercroft, with water. Heading down hill we crossed the bridge over the stream, that flows into the lower reservoir, before climbing the short steep slope up to the point where the route turns right and goes through the fields onto tracks leading to Ainsworth. We stopped at the back of the Duke William Inn to have our morning coffee break before admiring the Unitarian Church and Reform Club buildings. 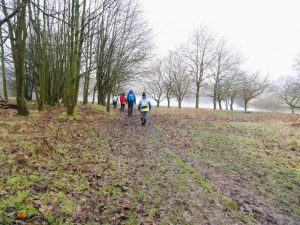 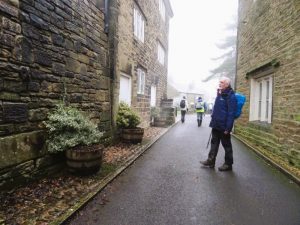 After the coffee stop, we retraced our steps back to the attractive Knowsley Cottages, where after a short distance we re-joined the route, turning left through a kissing gate. The footpath continued through the fields, passing Broomfield Nursing Home, on our left, once an isolation hospital, finally leading back to the reservoirs. After crossing the bridge, over the upper reservoir, we followed the path up to Bentley Hall Lane, where we turned left and headed to Old Holts Farm, on Harwood Road. Once across the road the route continued through the fields to Bowstone Hill Road that eventually joined Watling Street, where we tuned left and walked up to Affetside and the Pack Horse Inn, (1442) where we enjoyed our well-deserved lunch. 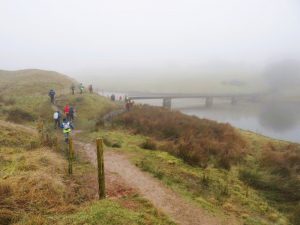 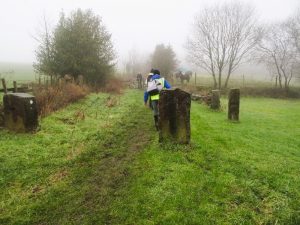 After lunch we headed down Back Lane to Turton Road and on down into Two Brooks Valley and into Hawkshaw. The final section of the route took us over Walves Bridge and right up Coal Pit Lane and through the fields to Holcombe Rifle Range, where we completed the first section of the Village Link, that is to be completed next month. Our way back to Greenmount was on familiar paths, having completed a total of fourteen, mainly misty miles. 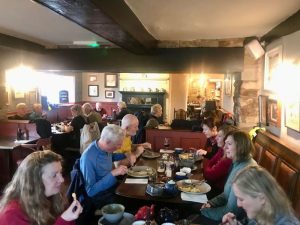 Lunch at the Pack Horse 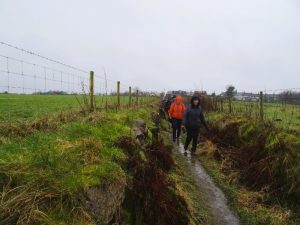 This month’s long walk started at the Jumbles Reservoir car park, with seventeen walkers braving the cold and misty morning, to complete the walk around the three reservoirs, in an anticlockwise direction. We started by heading passed the Information Centre and Café following the very muddy footpath to the concrete bridge. Due to the recent heavy rain the level of the reservoir was very high and there was a steady flow of water coming down Bradshaw Brook. The brook was used to power the textile mills down the valley since the Middle Ages, with the first of the reservoir, Entwistle, being built in 1831 to ensure a constant flow of water. As the demand for water increased, due to a growth in Bolton’s population, Wayoh Reservoir was built in 1876, followed by Jumbles in 1971, all the reservoirs are now owned by United Utilities. 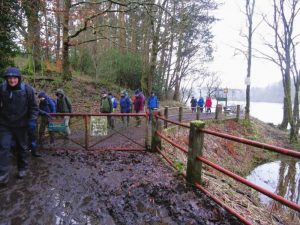 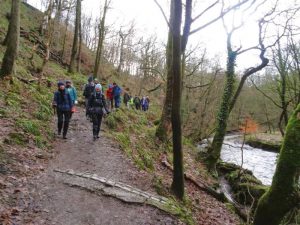 On arriving in Turton Bottoms we turned left onto Birches Road and made our way up to Bolton Road where we turned right and walked as far as the Black Bull Inn, turning first left and heading down to the embankment at the bottom of Wayoh reservoir. By now fine snow was starting to fall and the visibility had reduced so we quickly made our way to Crow Trees Lane, where the road crosses the reservoir. After crossing the road, we continued to follow the footpath to the top of the reservoir, where the trees provided shelter from the snow.

Once across the bridge, over Bradshaw Brook, we began the steep climb up to Entwistle Hall Lane where we turned right walking to the road bridge over Entwistle Railway Station, on the railway line from Rochdale to Clitheroe, through Manchester. At the Strawbury Duck we turned right, continuing along Edge Lane for a short distance before taking the first footpath on our left. As we walked through Lower House Plantation down the shore of Entwistle Reservoir, the snow had stopped falling and we had our first glimpse of blue sky. After turning right and walking for a short distance we stopped for our morning coffee break and by this time we had glorious blue skies and bright sunshine. 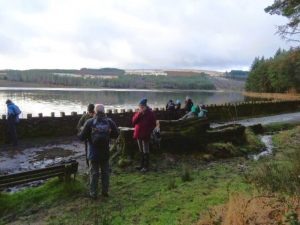 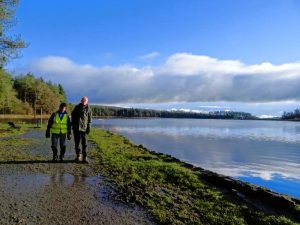 Back Markers on Entwistle Reservoir

Once refreshed we walked around the top of the reservoir following the partly flooded footpath down to the embankment where we crossed the road and walked through the car park.

Heading through the woods we soon arrived at the viaduct, that carries the railway line to Entwistle. At the shore of Wayoh Reservoir we turned right and walked down to the embankment, turning right again, and walking down into Chapletown. Once at the Chetham Arms we turned right down Kay Street and on to Station Road to join a footpath, on our left and headed to Turton Tower. The manor house, with its pele tower, dates to the 15th century and has had several extensions over the years. In 1620 the house and land were sold to Humphrey Chetham, famous for establishing Chetham’s School in Manchester and being a supporter of Oliver Cromwell. The building is now owned by Blackburn with Darwen Council. 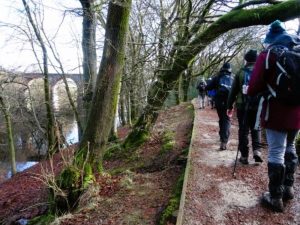 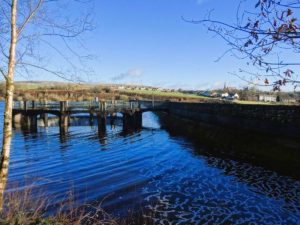 At the start of the walk, we would never have thought that we would be eating our lunch, bought in the well organised café, sat in the gardens of Turton Tower in brilliant sunshine. 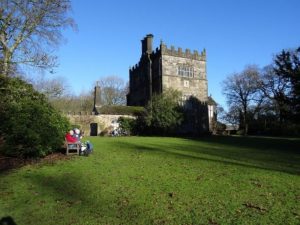 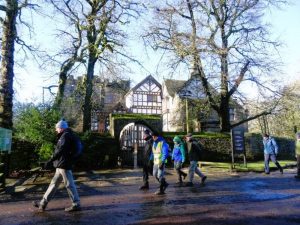 Heading back to Jumbles

After lunch we turned left down Chapeltown Road and joined a footpath on our right, which passes a second world war pill box, and eventually leads back to Jumbles Reservoir. Once at the concrete bridge we turned right and walked along the shore of the reservoir as far as Grange Road where we turned left through a stile, following a footpath down to Bradshaw Brook. After crossing the bridge, over the brook, we made the steep climb back to the car park having covered almost 11 mostly sunny miles.

Sunrise walk over the moors to Bull Hill

At 7.00am on a dark and rainy morning sixteen optimistic walkers set out from Lumb Carr car park to head up to Bull Hill hoping to see the sunrise. Our route took us through Holcombe village, and onto Moor Road where we started the climb, first up to Harcles Hill and then passed Pilgrims Cross to Bull Hill. On arriving at the trig point, we were greeted by strong winds and heavy rain with thick clouds blocking out any chance of seeing the sun rise. After spending several minutes hoping for the best a small silver of light appeared in the east but unfortunately it quickly disappeared behind the clouds. By now we were starting to get cold, we decided to head down the hill, looking forward to breakfast at Owens Restaurant in Ramsbottom. 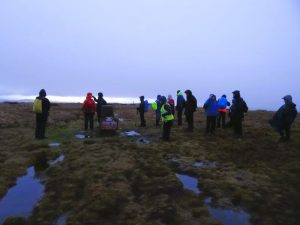 Once back down on Moor Road we made our way through the new stile, at the top of Buckden Wood, where the recent heavy rain had turned the small stream into a torrent. The route through the wood was spectacular, but the exposed tree roots slowed down our progress, as they were very slippy. 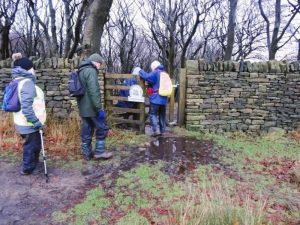 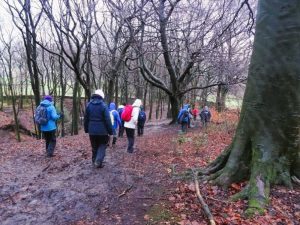 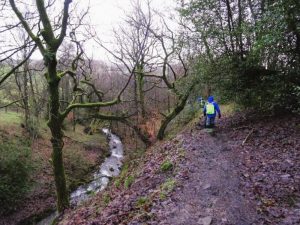 The stream in Buckden Wood

At the bottom of the wood, we arrived in the village of Strongstry where we tuned left under the disused railway line and joined a very wet footpath at the side of the river Irwell. Arriving in Stubbins we crossed the main road and made our way through some very wet fields to Ramsbottom and a well-deserved breakfast. After enjoying the warmth of the restaurant we headed back out into the rain and made our way up to Lumb Carr car park having covered 7.5 very wet miles. 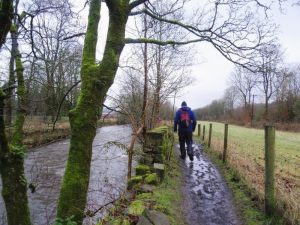 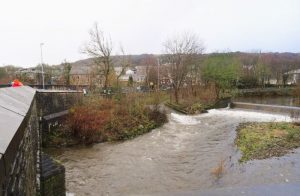