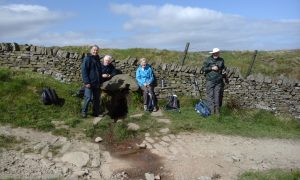 Five walkers joined the walk at Ramsbottom Railway Station, two of which were new to the group and had seen the walk advertised in the Transport for Greater Manchester booklet. We started the walk by crossing the railway line and walking up Kenyon Street and along to the soap factory at the end, which looked as through it was no longer in operation. The route followed the river towards Stubbins were we  crossed the road and continued along the river to Strongstry and up to Buckden Wood. The paths through the wood were dry, for a change, which made the ascent much easier. On reaching the track at the foot of the moor we made our way to Robin Hood’s Well, for our coffee stop. Whilst drinking our coffee we were entertained by a group of swallows, the first we had seen this year. Retracing our steps through the gate we made our way up to Bull Hill passing the cairn, built in memory to Ellen Strange who was murdered on the moors many years ago.  We did not linger at the trig point as the wind was very chilly. Descending the hill we made our way towards Redbrook and followed the brook in a southerly direction until we arrived at, what is left of, John Turner’s cave, where we enjoyed an early lunch. Opposite the cave you can clearly see the coal seam where it is said that John Turner would extract the coal to fuel his fire. Stalactites have now formed at the opening of the seam which have an orange stain from the iron oxide in the water that drips into the seam.

After lunch we made our way back to Ramsbottom passing Pilgrim’s Cross and Peel Tower having covered a distance of 8.5 miles