FIRST OF THE WEDNESDAY WALKS 2018

A VISIT TO JOHN TURNER’S CAVE AND BACK THROUGH EDGWORTH 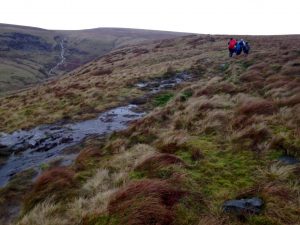 The walk started outside the Hare & Hounds Pub in Holcombe Brook on a very wet Wednesday morning. Seven walkers had braved the weather and we set off through Redisher Wood with the aim of visiting John Turner’s cave high upon the moors above Holcombe. The recent heavy rain had made the footpaths very muddy and the climb up towards Moorbottom Road was difficult. Once we emerged out of the wood we were greeted by Storm Georgina which was blowing from a westerly direction making our progress slow.

A short distance along Moorbottom Road we took a path on our right and started to climb up onto Holcombe Moor in a direction of Bull Hill. We continued along the path until we reached Red Brook walking alongside the brook to John Turners Cave. 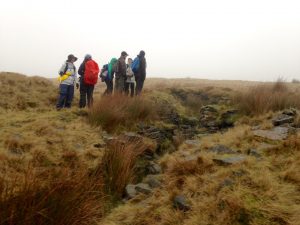 John Turner was born in 1811 and became an industrialist and gentleman who was considered as an eccentric by the villagers of Holcombe. He built the cave whist living at Nabbs House, in what is now Greenmount and it is said that he spent much time with his horses and gamekeeper hunting and shooting whilst staying in the cave.

From here our intended route was supposed to be on the other side of Red Brook but as the brook was like a torrent we had to retract our steps back to Moorbottom Road turning right onto a path, that leads onto MOD land, part of the Holcombe Rifle Range. The path crosses the brook over a bridge at Bottoms. Here we stopped for some time looking at the work done by Holcombe Moor Heritage Group to excavate the ruins of Bottoms Mill, Cinder Hill, which was built in 1780, the location of which was unknown until 2010. 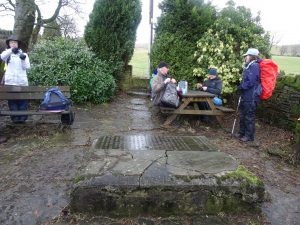 We were now able to head in the direction of our original destination, that of, Edgworth but not before stopping for lunch at Rodger Worthington’s Grave. Roger Worthington was a Baptist preacher who was persecuted due to his religious beliefs. He died in 1709 and has been commemorated by local walkers.

After lunch we headed passed Red Earth Farm into Edgworth where we turned left, in the village, walking as far as Barlow Institute where we turned left again through the woods and onto a path that overlooks Turton Bottoms and brings us to Bury Road, at Pallet Farm. Here we tuned right and after a short walk along the road we crossed over and turned left onto a path which took us in the direction of Top of Quarlton Farm.

By this time the weather had improved and our final section of the walk down, to Hawkshaw Road, was completed in sunshine. Once on the road we turned right at Higher House Farm where we headed back to the rifle range, passing Range House and on to the top of Redisher Lane. Here we turned left past Simon’s Farm and back down into Redishire Wood and on to the start of the walk having covered a distance of approximately 11 miles 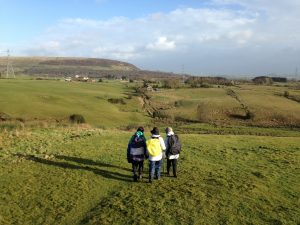