Pilgrims’ Way Walk: Haslingden to Hawkshaw
This walk is the second of four walks tracing a possible route that Saxon Monks may have taken between Whalley Abbey and Manchester Cathedral. Greenmount Village Walking Group have been involved in creating this countryside route which is described in detail in a recently published book, written by one of our walk leaders, Christine Taylor, entitled, Pilgrims’ Way from Whalley to Lichfield and the mystery of Pilgrims’ Cross. Produced by Holcombe Moor Heritage Group, see our website for more details on how to buy a copy. 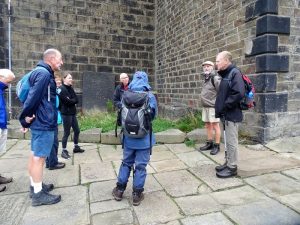 Eleven walkers, monks for another day, met at St James Church, Haslingden and having studied the Saxon double socket stone, thought to have been used to support ancient crosses, we made our way across Blackburn Road and following local footpaths made our way towards Helmshore. Once in the village we turned right on Helmshore Road and headed up to Moor Road then making our way up the the steep climb to Robin Hoods well, where we stoped for an early coffee break. 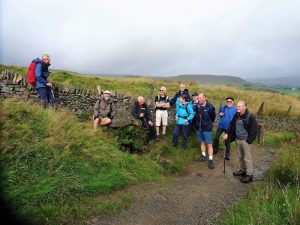 Refreshed we continued our climb, passing Ellen’s Cairn on our way up to Pilgrims’ Cross, where we rested whilst listening to an appropriate poem read by Christine. 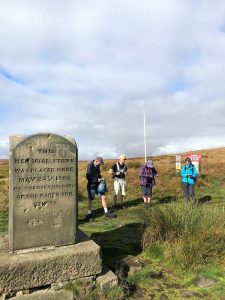 Continuing along the route we crossed Red Brook, which was just a trickle due to the recent dry spell, and headed for Roger Worthington’s grave, at the top of Hawkshaw Lane, where we ate our lunch. 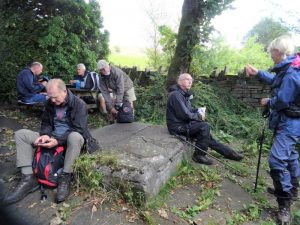 Our next section of the walk took us down the tarmac lane, a luxury not available to the monks, and into the village of Hawkshaw. 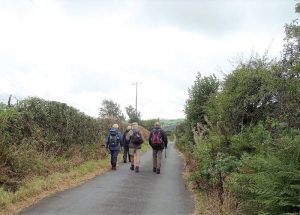 Once across Bolton Road we joined Two Brooks Lane, passing the tennis club and onto the end of the second section of the Pilgrim’s Route, which will be the starting point of the next walk in this series. Whilst most of this nine-mile section of the walk would be unrecognisable to the early monks, perhaps parts of the route across the Holcombe Moor would have remained familiar. 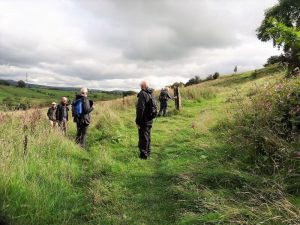 End of walk for today