This is a pleasant walk through the upper part of Haslingden Grane. In the 1800s the Grane was home of 1300 people who inhabited the scattered hamlets and farms of the valley.  At this time there was a school, chapel, shop, pub, 3 mills and the church of St. Stephen. The whole area altered after the building of Ogden Reservoir between 1903 and 1912. The sites of 2 of the mills were flooded and the church was rebuilt further dawn the valley in 1926.

Take the footpath on the left of entrance to the car park back to the main road.

Cross road and turn left following grass verge for a short distance to the footpath on the right.

Follow this path through trees passing metal gate continue down through Calf Hey car park then take dirt footpath on the left of gate, this runs parallel to the tarmac track. 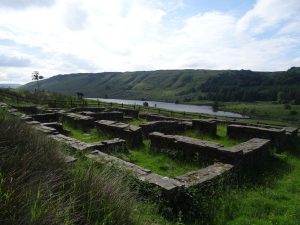 Grave stones of Grane Methodist Chapel, which closed in 1955, can be seen near this car park, which was once the site of an 18th century row of cottages called Chapel Row. Calf Hey mill was lower down the valley near here.

Go through kissing gate, turn right and follow tarmac road, reservoir down to the left. Shortly passing the excavated ruins of Hartley House and nearby cottages followed by those of Lower Ormerods.

At second ruins turn left to follow footpath downhill then over reservoir inflow then take steps up right through woods, passing 2 stone gate posts.  Even in the 1960’s there was high levels of pollution from industrial Lancashire and the Forestry Commission planted these trees to see how tree growth was affected by this pollution. At wooden post numbered 5 turn right over small wooden footbridge to follow Rossendale Way.

At next wooden signpost follow way marker bearing right on narrow path going uphill. Plantation on the left, after passing corner of fencing surrounding this continue winding uphill passing small disused quarry and then through woodland to go through kissing gate on the left.  Continue following path, which was once a walled lane passing ruins until the ruin which has 2 large sycamore trees. Enjoy the splendid views from here looking down over the 3 Grane reservoirs to Haslingden and the moorlands beyond.

This was once a walled lane linking the farms on this rough farming land, where it was impossible to survive without the additional income from initially handloom weaving and later working in the mills and quarries. This remote upper part of the valley throughout the 19th century had another industry, that of illegal whisky distilling.  It was made in great secrecy in hidden chambers and passages that ran beneath the farmhouses. The first ruins is that of Top ‘o’th’Knoll, followed by Peak and Close Bottom. 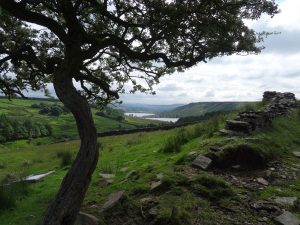 Here bear left up to wooden marker post, (as the lower track is very boggy).  Turn right and follow Rossendale Way passing another 2 wooden marker posts, then just before a little bridge turn left uphill towards broken marker post.  Here turn left and continue straight on following stone wall up to and over ladder stile.

Continue straight on to Broadhead road.  Turn right and follow this to dip in road.  Here take footpath right, follow this straight on in line with telegraph poles through fields and over 2 stiles to the busy Grane road.

Go straight across and through grassed area to far corner of wall on the right where there is the next stile. Once over bear left following drainage ditch to cairn on top of hill.

From here there are marvellous views in every direction and nearby is the Hynburn Wind farm with its 12 turbines.

From the cairn continue in the same easterly direction  just below the top of the moorland following one of the many paths running roughly parallel to the high stone wall and the road  on the right continue for about half a kilometre to the top corner of isolated stone walled field.  The stile is near the corner, but it is easier to follow path made between wall and fencing going steeply downhill towards the kissing gate.  At the junction of paths leave the West Pennine Way and continue downhill to Clough Head Car Park and Café which is only a short distance away.