This walk was the first of the Come Walking Series and it was also the first of our walks that was included in the Greater Manchester Walking Festival Series, organised by Transport for Greater Manchester. Twenty-three walkers started the walk on a rainy evening at Turton Tower which was built in the 15th century and is now owned by Blackburn and Darwen Council. Several of the walkers were new to the group so we spent some time completing introductions before heading towards the ornamental railway bridge that spans the Bolton to Blackburn line.

Once over the bridge we headed up the track, avoiding the footpath on our left due to a broken down stile, continuing up to the junction, were we turned left passing through a kissing gate and making our way steeply uphill towards Torra Barn. At the top of the hill we stopped to get our breath back and we were rewarded with the first glimpse of sunshine. Following the track, which passes through part of Turton Golf Course, we headed to a kissing gate at the end of the track which we passed through and walked along the edge of a field in the direction of Little Stanrose Farm.

Climbing up to Cheetham Close

Passing to the right of the farm we climbed over another stile into a field with lots of very young lambs and a clear view of the sunshine over Winter Hill to our left. Once through this field we joined the road leading to Whittles Farm which we crossed and turned right over a stile onto a footpath which in the past has been very muddy but it appeared that work had been done to improve the drainage so we made our way up to New Butterworth Farm without getting our feet wet.

From here we turned right through another stile on to open moorland and followed a path up to a series of stiles where we joined the section of the West Pennine Way (WPW). Turning right through these stiles, we followed the WPW and started the climb up onto Cheetham Close stopping to look back at the view over Delph Reservoir and Longworth Clough. 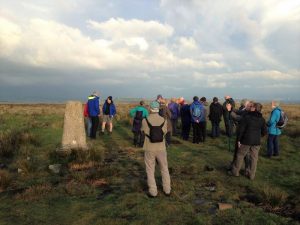 Once at the trig point we stopped to admire the views over Bolton, Greater Manchester and the Pennines which were bathed on sunshine, but unfortunately thick cloud to the north meant that we could not see the Yorkshire Hills. Heading away from the trig point we kept close to the path as we could hear sky larks on the moor presumably on their nest. 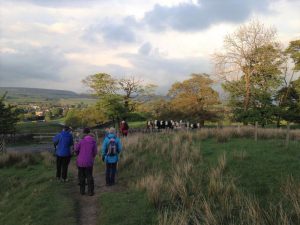 As we descended back down the hill we caught a glimpse of a row deer in the trees and on reaching the track we were greeted by a small herd of cows that kindly posed for photographs.

Passing through the stile, at the bottom of the hill, we joined the track that took us back to Turton Tower having covered a pleasant 3.8 miles most of them in