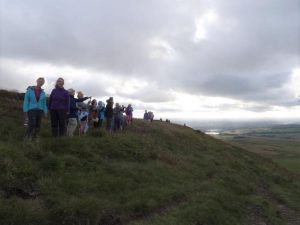 This week’s walk started at the lay-by on the Belmont to Rivington road where it took a little while to pack all of our cars into such a small space with our concentration being distracted by the noise of the motor bikes racing along the road.

Once organised twenty-six walkers turned right along the road, avoiding the speeding bikes, and turned into the track on the left-hand side of the road, called Belmont Road, and climbed up to a stile, also on the left, through which was a steep path leading to the trig point and summit of Winter Hill, which is 1498ft above sea-level. On the way up several stops were made to admire the views that were limited at this stage due to the cloudy conditions. 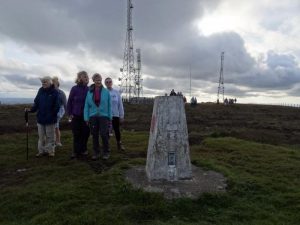 Having reached the summit, the clouds had started to clear and we were able to see the outline of the Lakeland Hills and the sun shining on Morecombe Bay. In the other direction we could see the Derbyshire Hills and closer to home Cope Lowe and Scout Moor were clearly visible. From the trig point we made a detour from our route to visit the 1000ft transmitter tower, built in 1965, to provide most of Greater Manchester and Lancashire with their television programmes. 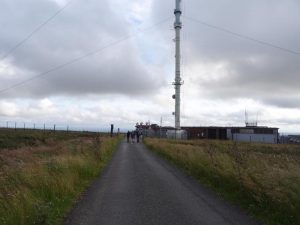 We also stopped to look at the memorial plaques which are reminders of past tragedies that have occurred on Winter Hill. In 1958 a plane crash killed thirty-five of the passenger on a flight from the Isle of Man and in 1838 a young Scottish traveling pedlar was murdered on the hill.

Leaving the summit, we made our way down a steep path which headed towards Rivington Road, still enjoying views of the coastline on our left, the Pennines on our right and the farmland of Lancashire ahead of us.

At the bottom of the slope we turned right onto an attractive path, which followed a stream that flowed into The Blue Lagoon in Belmont Village. At the lagoon we crossed the road and passed through a kissing gate on the other side of the road which led on to a path that climbed up onto the moor with views of Winter Hill to our left and Belmont to the rear. The path also took us back to where the cars were parked, having covered an energetic 5 miles