The aim of this walk was to identify a series of photographs that showed partial views of objects to be found along the route with a prize for the team who could spot most of the objects. We started the walk at the Jumbles Reservoir car park on a sunny evening and fifteen walkers headed past the café in the direction of the concrete bridge passing several of the objects along the way. 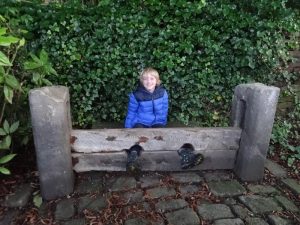 Once over the bridge we made a detour past the fossilised tree, which was one of the objects, after which we climbed the steps and headed for Turton Tower again passing objects along the way. From the tower we walked through the woods stopping to look at the feral ponies in the field on our right before turning right into Chapeltown where there were several more objects to be found one them being the stocks which the youngest member of our group agreed to sit in as long as no-one threw anything at him.

After turning right, we walked past Saint Anne’s Church and along a footpath that took us down onto Wellington Road where we turned left for a short distance before taking a path on our right down to Vale Street.

Jumbles in the moon light

At the end of Vale Street, we turned right onto a footpath which lead us back to Jumbles Reservoir. Once back at the bridge our leader checked the answers to the quiz and one lucky team were awarded the frost prize of a box of chocolates. By this time, it was almost dark but we were guided back to the car park by the light from the full moon having covered an educational 4 miles.