Two changes were made to the planned walk, firstly as the car park of the Higher Barns now closes at 7.00pm we had to park on the drive up to the barn. The second change was to miss out the climb to Rivington Pike, as we were very fortunate that one of the many volunteers, who have helped to reclaim the gardens, had kindly agreed to guide us around the many paths that lead up to the Pigeon Tower, with the added bonus that he had the key to the tower. The gardens were built between 1905 and 1925 by Lord Leverhulme (William Hesketh) with the help of landscape designer Thomas Mawson.

Twenty walkers started the gentle climb through the trees up to the first ruin, which was that of the South Lodge. We continued along the footpath, on our right to the first of the Summer Houses, that were used to entertain their guests, with clear views over to the Fylde Coast. 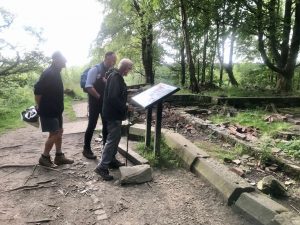 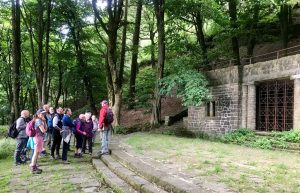 Further along this path we arrived at the bottom of The Ravine, and we were surprised to be told that the valley had been created by blasting away the hill side, and that some of the stone used to create the effect were in fact artificial. 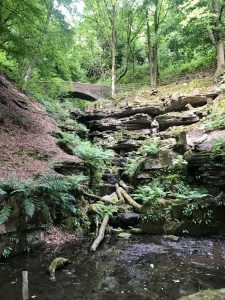 Our next stop was at The Japanese Lake where we could see the amount of work that had been done to bring it back to its original beauty. 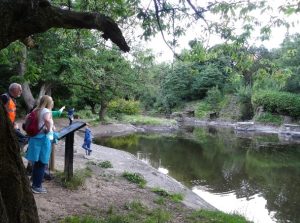 After passing what remains of the fruit and vegetable gardens we arrived at the Great Lawn and several other Summer Houses. Perhaps the main feature of the gardens was the Bungalow, where family and guests would have stayed, sadly there is little evidence of this structure apart from the outline of the foundations.

Our final stop, which we had all been waiting for, was The Pigeon Tower, originally called the Lookout Tower, then the Dovecote Tower, the Pigeon Tower as it is now known was built between 1905 and 1909. The tower was commissioned and erected as a birthday present to his wife, Elizabeth Ellen. Once at the top of the tower we could enjoy the views over the gardens, we could not help but admire the nerve needed to climb the steep staircase in crinoline dresses. 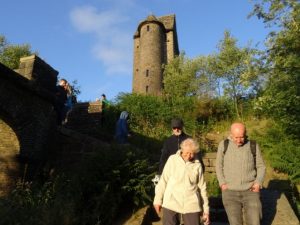 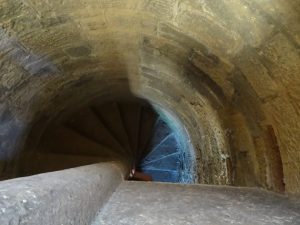 Staircase to the top of the tower 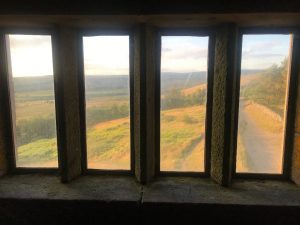 View from the top

We had good views of the sun setting over the Fylde Coast before we descended the many steps, first down to the Italian Lake then over the Seven Arch Bridge and the back to the car park having spent a most enjoyable evening learning about Rivington Terraced Gardens, thanks to our guide. 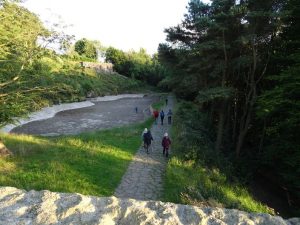 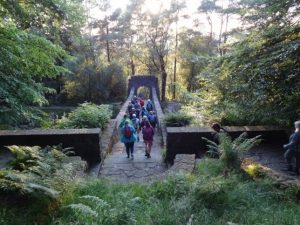 If anyone wishes to donate to the work being done to renovate the gardens text RTG1 to 70460 to donate £1 or RTG2 to donate £2 etc. 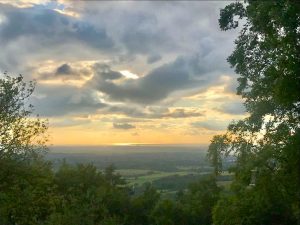