WALK 5 of the COME WALKING SERIES 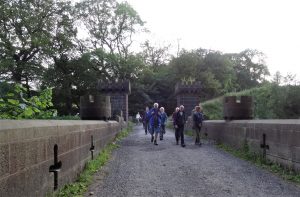 Forty-six walkers started the fifth of the Friday night walks from Turton Tower, which was built in the 15th century and is now owned by Blackburn and Darwen Council. The walk follows the route of the West Pennine Way (WPW) until we reach Edgerton which means we can follow the way-markers. We turned right out of the car park and made our way over the ornamental railway bridge which spans the Bolton to Blackburn railway line, turning right after a short climb following the WPW way-marker. The path follows a stone wall up to a point where there are kissing gates on either side of the track, we took the one on the left hand side and started the steep climb up onto Cheetham Close. 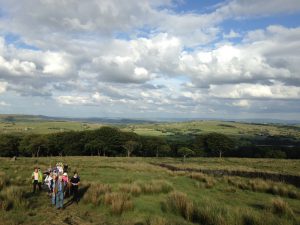 Pausing for breath part way up the climb we looked back and admired the views towards the Pennines with a clear view of Holcombe Hill and the top of Peel Tower. 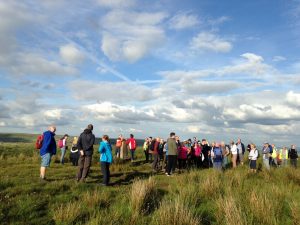 Once at the trig point on Cheetham Close we spent some time identifying the towns, villages and hills that we could see from our 360-degree vista, in particular Winter Hill the site of last week’s walk. We also looked at some of the stones, which are said to be the remains of a Bronze Age stone circle, we did not wander far from the footpath due to the nesting birds on the moorland. 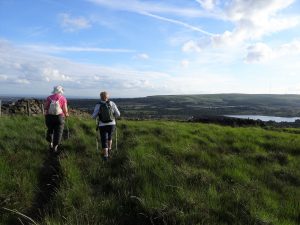 Walking in a westerly direction from the trig point we turned left, after climbing over a stile, made our descent down Cheetham Close from here we had a clear view of the sailing yachts on Delph reservoir and Belmont Village. At the next stile we turned right, where the moor was covered in many varieties of wild flowers, and walked down to a track, on which we turned left and made our way to Dimple Hall, built in 1688. 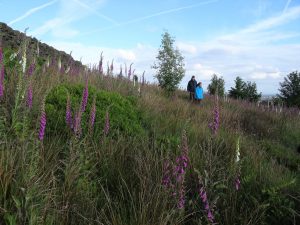 Just after the hall we turned left onto a narrow footpath leading us to Cox Green Road, where we abandoned the WPW, for another day, and turned left walking along the road as far as a lane, leading to Whittle Farm.

At the farm we turned right and made our way towards Torra Manor and Turton Golf Club. Once past the manor we headed though the fields back towards the railway line and Turton Tower having covered 4.6 miles