Last of the Friday Night walks in the Come Walking Series: Edenfield to Irwell Vale

On a very wet evening with the met office forecasting more heavy rain only four hardy walkers arrived at the starting point for this walk, The Rostron Arms Edenfield. Due to the lack of walkers and the possibility of more heavy rain it was decided to change the planned route keeping to solid surfaces where possible.

We turn left off the main road into Exchange Street and headed down hill passing Langley House on our left and crossing the bridge over the A56 before dropping down to the farm where we normally see a couple of llamas which must have been sheltering from the rain this evening. Just past the farm we joined the footpath that follows the East Lances Railway from Stubbins to Irwell Vale. Turning right along this path we followed it through the Subway and turned right with the intension of heading to Irwell Vale however, the water cascading down from the fields into the River Irwell prevented us from doing so. Instead we turned around and made our way back up onto the disused railway line. 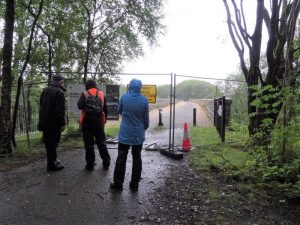 We were interested to see that track going over the viaduct was fenced off and a notice informed us that work was being carried out to extend the track, which is part of the National Cycle Route No 6, up towards Accrington. The railway line was formally part of the Lancashire & Yorkshire Railway route from Ramsbottom to Accrington and the attractive Lumb Viaduct was built in 1848 and closed in 1966. The viaduct was restored in 2015 and is now a listed building. 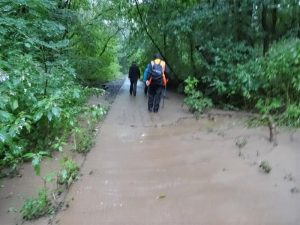 Turning around once again we headed towards Strongstry passing a section of the track that was covered in mud due to a small landslide. When we arrived in the small hamlet we turned right onto a footpath that resembled a river and followed the Irwell into Stubbins.

Once on Bury Road North we turned left walked for a short distance before crossing the road and headed along Rosebank passing under the bridges spanning the M66 and the A56, before coming to the ruins of the Rosebank printing works that appeared to be in a much worse state than the last time we passed it.

At the top of the track we were back in Edenfield having covered 3.5 wet miles. After a short discussion we decided to end the walk as by this time the light had started to fade and we were very wet. This year’s Friday night walks have been very successful with an average group size of 30 walkers and we are already looking forward to planning next year’s walks which will be publicised on our website.