The second of our Friday night walks started from Barrow Bridge, which was built in the 1830s as a model village to house the workers of Dean Mills. Twenty-six walkers turned left out of the car park and headed for the 63 steps, known as The Miner’s Steps as they were used by miners and quarry men on their way to work.

At the top of the steps we followed the footpath, sign posted, Walkers Fold which had an association with Walt Whitman an American humanist poet. Once through the settlement we crossed Collier Row Road and joined a recently refurbished footpath, which the Woodland Trust had created along with a new substantial car park, and headed over Burnt Edge to Holden’s Farm. 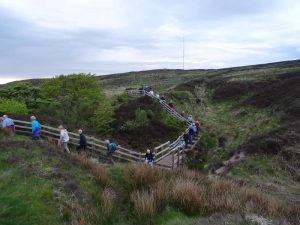 From Holden’s Farm we turned right and walked along Coal Pit lane as far as Roscows Tenement Clough where we turned left through a kissing gate and climbed up a steep path which lead onto Smithills Moor. 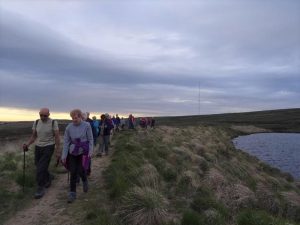 At the top of the path, to our right, we enjoyed views looking over towards North Wales and the Mersey Estuary and to our left views of young, Canada geese, goslings following their parents across Dean Mills Reservoir.

We walked along the bank of the reservoir until we joined the path on our right that was part of the West Pennine Way and on which we had recently replaced the way markers. The path drops steeply through a wood and leads back onto Coal Pit Lane where we turned right and headed for the memorial commemorating the mass trespass.

The mass trespass took place in 1896 when Colonel Richard Henry Ainsworth erected gates across access roads to Winter Hill. Unfortunately, the trespass was not successful and it took another 40 years before the moors were opened to the public.

Back to Barrow Bridge

We continued to walk along Coal Pit Lane back to Roscows Tenement where we turned left following the footpath which took us down steep steps to Sheep Cote Green Farm. We were sad to see that the footpath on our left had been blocked by a locked gate but we were pleased to see the work that the Woodland Trust had done in planting lots of saplings and building new fences and kissing gates.

Following the path through the woods we made our way back to Walker Fold and retraced our route back to Barrow Bridge having covered 6 miles.