Walk 10 of the Come Walking Series of Walks: Jumbles to Affetside

This was the first Friday night walk of this series that had a poor weather forecast and this was reflected in the number as only eight walkers started the walk, with one walker being new to the group.

We joined the footpath at the far end of Jumbles Car Park and headed down the steep hill, reminding walkers that they would have to climb back up the hill at the end of the walk. We tuned left at the bottom of the slope and joined the path through Kingfisher Valley in the direction of Bradshaw, keeping Bradshaw Brook on our right hand side.

We stopped to admire the work that had been done to the fishing lakes and café at Bradshaw Hall Fisheries with its colourful hanging baskets. The path, in places, was not visible due to the plant growth on either side, especially himalayan balsam.  We made our way through the valley passing the site of Bradshaw Mill on our left. Records show that there has been a mill on this site from 1542 until the last one was demolished in 1989. 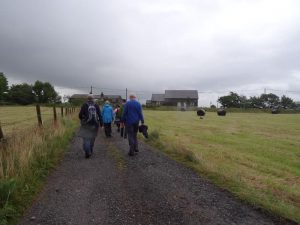 On reaching Rigby Lane we turned left up to Bradshaw Road, which we crossed and made our way along New Heys Way into a small housing estate. At the far end of the estate we joined a path leading to Riding Gate and the attractive hamlet of Lower Knotts where we turned left climbing a steep path up to Top’o’th Knotts, stopping to admire the views which were limited due to the low cloud. 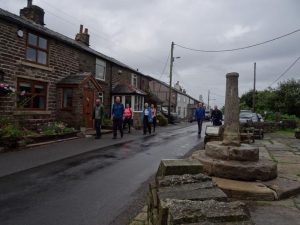 Affetside in the rain

From here it was a short climb to Watling Street, which originally was the site of a Roman Road leading from Manchester to Ribchester. Turning left we passed the Pack Horse Pub on our right and made our way to the centre of Affetside Village where we did not linger as it had started to rain heavily so we decided to make our way, through the fields, back to the Jumbles Car Park having covered a distance of 5 miles