On a wet Friday evening, with more rain forecast, twenty-three walkers started the walk on Smithills Dean Road. This location had to be changed from the one advertised as when we were checking the route, we found that major excavation work was being carried out in Barrow Bridge, making it impossible to park our cars on the village car park. We began our walk turning left on a footpath, facing Dean Gate Farm and making our way to the original starting point of Barrow Bridge. The enchanting village was built to house the workers of Dean Mill, built in 1830 by Thomas Bazley and Richard Gardner. The more attractive properties, with private bridges, were built for the managers of the mill. 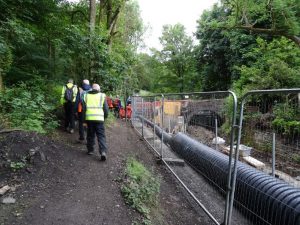 Once through the village we followed the stream up to the Miner’s Steps that were used by miners on their way to work in the mines on Winter Hill, a rather daunting thought having to climb 63 steps every morning. At the top of the steps, we followed the footpath Walker Fold Farm, with its plaque commemorating Walt Whitman (1819-1892) an American poet. 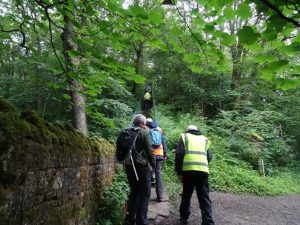 After crossing Colliers Row Road, we joined a path on our left that took us through the woods, where many of the trees having been planted in the last ten years by Woodland Trust. At the edge of the wood, we reached Sheep Cote Green Farm where we turned left and headed up to Rosco’s Clough Tenement, which is a wooded valley leading up to Smithills Moor. 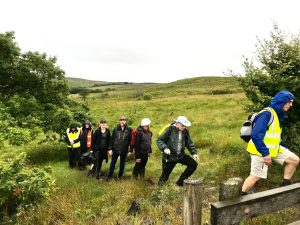 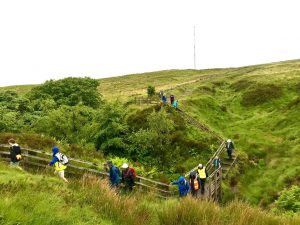 The footpath through the valley is part of the West Pennine Way, which we followed, taking us passed Dean Reservoir and back down to Coal Pit Lane. 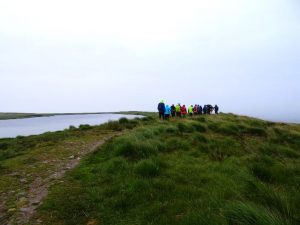 Once on the lane we headed back down to Smithills Dean Lane having covered 6 eventful miles.