WALK 3 of the COME WALKING SERIES 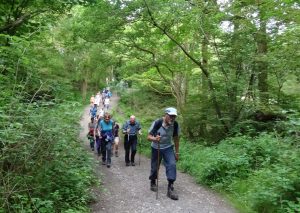 The third of the Friday night walks started from the car park of the Roddlesworth Information Centre on a dull but dry evening with the threat of rain later. Thirty-six walkers crossed the road and entered the wood through a kissing gate opposite the Royal Arms Pub. The footpath makes a steep decent down to the main path where we turned right and made our way through the woods, which were already dark due to the trees being in full leaf and sky getting increasingly cloudy. 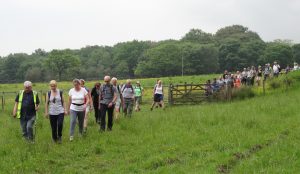 After about half a mile we turned right, taking a narrow path which led to an old iron kissing gate and though a field up to Higher Hill Farm. This is the 17th century farm with a garderobe, or outside toilet half way up the wall, which normally draws peoples interest but on this evening it was upstaged by a beautiful foal in the next field. 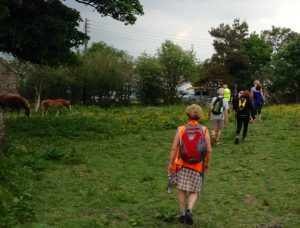 Once through the farm building we turned left passed Rose Cottage, which lived up to its name with the roses climbing up the wall, and followed an old packhorse route down to the Pinfold, a small enclosed piece of land where stray animals were kept. 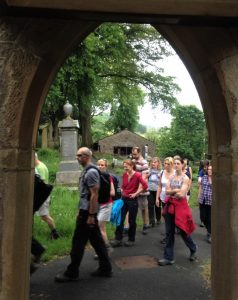 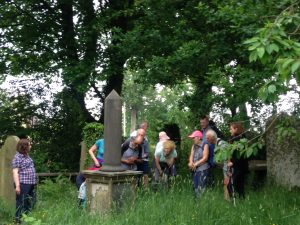 The path took us onto the road leading to Tockholes village and St Stephen’s Church where we spent some time admiring what was left of the old church, built in 1833 and replaced by a not so attractive 1965 building. Items of particular interest were, the Toches stone, from which the village takes its name, the outside pulpit and the grave of John Balderston who invented the weft fork which revolutionised the weaving industry at the time. 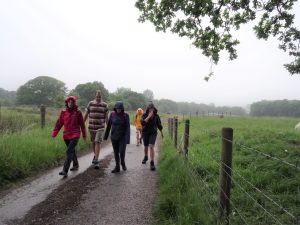 Abbey Village in the rain

We now retraced our steps along the road and turned right through a kissing gate, just before the grave yard of the UCR church, onto a path that took us to the track leading to Crowtrees Farm and through the fields to Red Lees Farm where we saw a buzzard soaring overhead. Once through the farm we crossed a foot bridge and onto a tarmac road. It was at this point that the rain we had been expecting started to fall, very heavily, and we could hear the thunder in the distance, but fortunately we did not get any lighting as most of the way back was through trees. After crossing the road, we made our way up a steep slope and through the fields to Abbey Village where we heard the sound of a cuckoo.

From Abbey Village we followed The Goit, a channel built to link the reservoirs together, and made our way back into the woods and onto the track which took us back to Roddlesworth Information Centre having covered 5.5 very wet miles