Twenty-two walkers set out from Turton Tower on a cloudy Friday evening with rain forecast. After leaving the tower we made our way over the ornate bridge and turned right along a recently resorted footpath, which was part of a major project to enhance the railway banking. Once through the new gate we headed across the field in the direction of Torra Barn where one of our walkers gave us a brief history of the barn, and surrounding area during Tudor times. 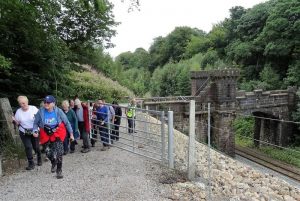 We followed the path through Turton Golf Course turning right at the first stile and headed across the field to what was once a cattery, but now appears to be a small housing development. On reaching Whittles Farm we decided to continue down the access road to the Cox Green Road as the footpath we planned to take was too overgrown. After walking a short distance on the road, we took a path on our right that too us up to New Butterworth’s Farm. Continuing along the path we soon joined the route of the West Pennine Way, and we followed the way markers to the summit of Cheetham Close. (329m)

Once on the summit we could see the clouds moving towards us, from the south, so whilst admiring the views we took the opportunity of putting on our waterproofs. 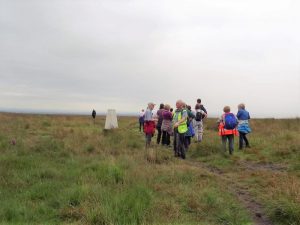 As we made our descent down to Chapeltown the rain cleared and so we were able to return to Turton Tower in the dry having covered a distance of 4 wet and dry miles. 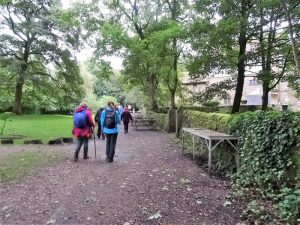 Back at Turton Tower