Christmas Special for all the Family 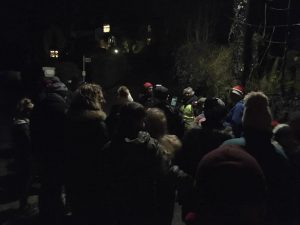 Thirty walkers, ten of them children, met outside the Hare and Hounds Pub in Holcombe Brook on a fairly mild and dry night for December. After everyone had completed the attendance form a brief outline of the route and safety precautions were explained along with details of the quiz. On the route up to Peel Towers glow rings had been attached to a number of bushes with a short festive sentence which had a letter missing, for example “We th-ee Kings” when all the letters had been collected they made up a word relating to Christmas and prizes were given to successful answers. Also wooden animals had been placed around the tower, to be found by the children, this was made more difficult as the lights were not working inside the tower, however, lights had been placed on the steps. 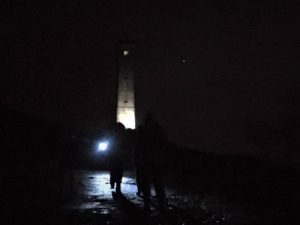 Arriving at the tower

From the pub we headed up the cobbled road turning left at Darul Uloom School making our way towards Hey House before joining Moorbottom Road. Once on the road we turned left for a short distance before climbing over a stile on our right and joining a steep path up to the main track to the tower. At the tower we were able to get our breath back and continue with the festivities. 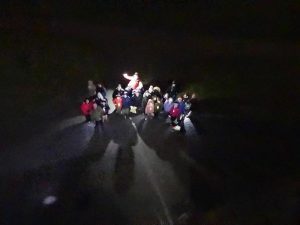 View from the tower

A number of brave souls ventured up to the top of the tower where they were rewarded with a clear view of the many lights over Greater Manchester. After giving the prizes to the winners, all the children were given sweets and glow sticks and everyone enjoyed hot Vimto, mince pies and ginger cake. 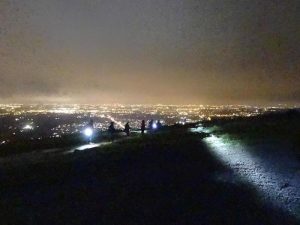 Heading down the hill

Once we had checked that everyone was out of the tower we locked up and headed down the hill back to Holcombe Brook where everyone was given details of our next festive walk on the 27th December.