WALK 10 of the COME WALKING SERIES 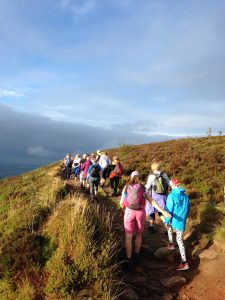 The clouds have cleared

This walk started from Sunnyhurst Wood Car Park Darwen, on a damp Friday evening, but with a promise of better weather to come. Twenty-two walkers left the car park turning into a wide track facing the Sunnyhurst pub and we made our way towards Darwen Tower.

After a short climb we were able to see the tower in the distance and by this time the rain had stopped and the sky had started to clear. The route up to the tower was a gradual slope zigzagging to and fro in order to make a gentler climb. 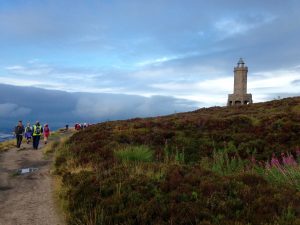 Once at the tower we were rewarded with views across the Lancashire planes but clouds in the distance stopped us seeing the Lakeland and Derbyshire hills. We spent some time at the top of the tower identifying places of interest and in particular the ornate factory chimney opened in 1868 at India Mill. The tower itself was built in 1898 to commemorate the diamond jubilee of Queen Victoria and has had several new domes fitted since then with the latest one being replaced in 2012. 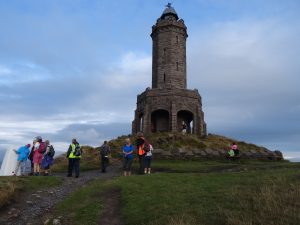 Several routes descend from the tower and we chose the scenic one that took us through fields of long grass and eventually entered the top of Bold Venture Park with its wooden statues. 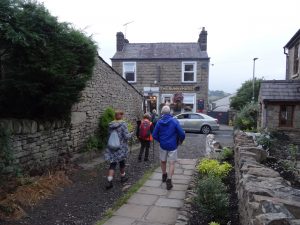 From the park we walked through more fields before joining the track that took us back to Sunnyhurst Woods having covered a distance of 4.5 miles.