On a gloriously sunny evening thirty-four walkers set out from the car park of Helmshore Textile Museum car park turning left after crossing Blackburn Road. The mill was built in 1789 and stopped production in 1978 fortunately most of the machines have been preserved and the museum is well worth a visit, but check the opening times as it has limited opening.

After walking along the road as far as the sign for Albert Mill Antiques we turned right and started the steady climb up onto Musbury Heights. As there was a cloudless sky the views over to Musbury Tor and beyond to Cowpe Lowe were stunning and we spent some time admiring them before reaching the summit. 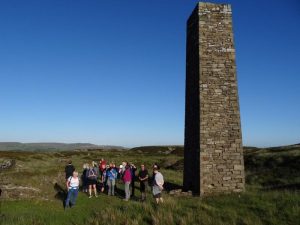 All around there was evidence of the quarrying that took place in this area a century ago and it was difficult to distinguish which were natures mounds from those created by the quarrymen. The most attractive feature was the chimney of the scrubbing mill that was rebuilt in 2004 with funding from English Heritage.

From the chimney we retraced our steps to the signs for the West Pennine Way (WPW) where we turned left and headed to the top of the tramway where once again we had glorious views this time of the Grane Valley below. The tramway was used to transport the finished flagstone down to the valley where they were loaded onto railway wagons.

The track was very steep and stony and great care was needed to make sure we all got down safely. At the bottom we followed the WPW which passes in-between Ogden and Holden Reservoirs, which appeared to have more water in them than a few weeks ago, 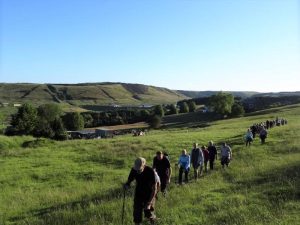 Once across Grane Road we headed through Leys End Farm where we turned right, leaving the WPW, and walking to Mary’s Wood that was planted in memory of a local farmer’s wife.

The path along the edge of the wood has a number of difficult stiles to climb but eventually we arrived back on the Grane Road, which we crossed and turned left onto route 6 of the National Cycleway that took us back to Helmshore Textile Museum having covered 4.5 gloriously sunny miles.