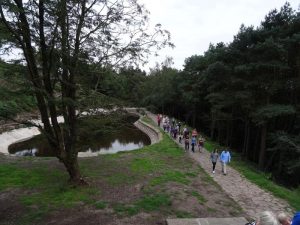 It was a fine evening as 33 walkers set off to explore Rivington Terraced Gardens and Rivington Pike.

Rivington Terraced Gardens were originally created for soap magnate Lord Leverhulme as a spectacular venue for him to relax in and entertain. Situated on the hillside below Rivington Pike, the Gardens were designed by noted landscape designer Thomas Mawson between 1905-1922.

The walk started on the track leading to the 7 arched bridge, specially commissioned by Lord Leverhulme on a bridge he had seen while traveling in Africa.

We then followed the West Pennine Way over the bridge and up flights of steps, to a Summer House before turning left to walk alongside the Italian lake where Lord Leverhulme and his guests took a morning swim.   Then up to the Pigeon Tower which was originally a dovecote with 4 rooms and a spiral staircase with lady Leverhulme’s sewing room on the top floor.  We then followed paths through the higher part of the gardens, passing Neptune’s pond, Orchestra Lawn to the few remains of ‘The Bungalow’ which was Lord Leverhulme’s garden residence. The original bungalow was made of wood and burnt down by suffragettes in 1913.  It was replaced by a stone bungalow, but this was demolished after the 2nd World War.

We left the Gardens by the two stone gate posts before turning left to go up the stony track then steps to Rivington Pike.

This is the site of an ancient beacon which was lit on July 1st 1588 to warn of The Spanish Armada.  The Tower was built on the beacon site in 1733, some of the stones to build the tower are from the beacon. The tower was used originally as a shooting lodge.  It is a grade 2 listed building.

It is a marvellous viewing point and we could see the hills of Wales and the fells of the Lake District as well as the Flyde coast line.

Returning to the Gardens we explored the lower part of the Gardens including, the kitchen Gardens, Bothy, Japanese lake, before going over one of the bridges across the Dell Cascade, a man-made ravine, then followed the terraced paths back to and under the 7 arched bridge back to the car park.

We admired the work being done by the Rivington Heritage Trust, in partnership with Groundwork Cheshire, Lancashire & Merseyside and United Utilities, plus many volunteers to conserve these truly magnificent gardens after receiving a 3.4-million-pound heritage Lottery grant.