WALK 11 of the COME WALKING SERIES 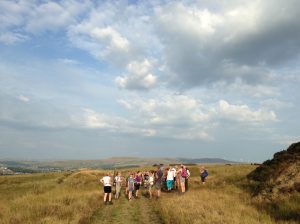 Helmshore Textile Museum car park was the starting point for this Friday night walk. The museum is well worth a visit and is open Fri to Sun 1200-1600 hours July to October and includes the original water wheel that powered the cotton machines in the mid 1800’s.

Twenty-eight walkers made their way through the village turning right past Albert Mill Antiques and making our way up a steep path to the summit of Musbury Heights. At the top we made a short detour to look at the remains of the quarry that produced flagstones for some of the country’s most famous streets. 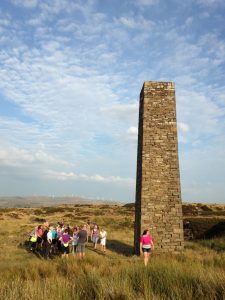 The mill chimney was rebuilt by English Heritage in 2004. 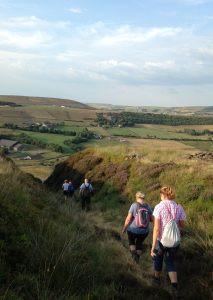 From the quarry we retraced our steps, back to the West Pennine Way (WPW) and started the steep descent of what is left of the Grane Mills Tramway, used to transport the stone down to the valley below and was closed in 1931.

From the tramway we had clear views over Ogden and Holden Wood Reservoirs, with the latter having very little water due to the recent drought. Beyond the reservoirs we could see Haslingden and the Pennine Hills in the distance.

Keeping on the WPW we crossed the Grane Road and made our way through Leys End Farm and up to the stile, at the top of a field, where we left the WPW turning right and heading for Mary’s Wood, which was planted in the memory of a local farmer’s wife.

Once through the wood we followed a footpath, with numerous stiles, which eventually took us onto St Crispin Way where we turned right and walked down to Haslingden Road.

After crossing the road, we joined the National Cycle Route 6. This track was originally the route of the Bury to Accrington railway line on which we continued to walk along until we reached the Helmshore Textile Mill car park having covered 4.5 miles.