Tonight’s walk started at Sunnhurst Wood car park high above the town of Darwen. As it was a warm sunny evening Sunnyhurst pub was very busy and most of the spaces on the car park had been taken so a number of walkers had to park on the road. Once we were all assembled at the car park twenty-six walkers started the walk by tuning right up a steep path, facing the pub. At the top of the path we turned left and followed a footpath which made its way around the hillside that had clear views, to our left, overlooking Darwen.

Once at the end of the path we turned left onto a lane that lead to one of the entrances to Bold Venture Park, an extensive historic park opened in 1889 with a sculptor trail having been added more recently. The path follows the stream, climbing steeply through the trees, which had become over grown and it was difficult to find all the sculptors along the trail. 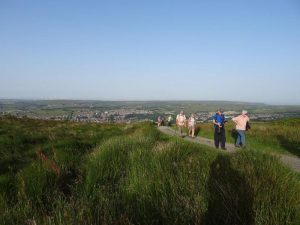 At the top of the park we exited onto the main path that continued to climb up to Darwen Tower. The tower was opened in 1898 to celebrate the diamond jubilee of Queen Victoria. Unfortunately, the dome on top of the tower was destroyed twice once in 1947 and more recently in the gales of 2010. The present dome was made and fitted by a local engineering firm in 2012. 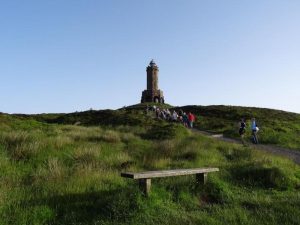 As the tower is always open to the public a number of our walkers climbed the steep steps to the top but unfortunately the views were limited due to a low haze and we could only just make out the sun’s rays over the Fylde Coast and a misty outline of Blackpool Tower. However, we could see the area nearer to the tower and we spent some time identifying local landmarks.

After climbing down the tower we turned left, past the trig point, and joined a section of the West Pennine Way (WPW), for a short distance, as it descends across Darwen Moor. Leaving the WPW we turned right onto a footpath that headed past Sunnyhust Hey Reservoir and through the field until we joined the track leading back to Sunnyhurst Wood having covered 4.5 sunny miles.