As only twenty-seven walkers, thirty being the maximum size of group, met up at Helmshore Textile Museum, it was decided to stay as one group and walk the route in a counter clockwise direction. Taking the footpath on the left, at the back of the car park, we made our way up the steps and onto the old railway line following the path through Swinnel Bank Park and across Grane Road where we turned right into Hunt Bank Road. After a short distance we climbed over the first of many stiles and followed the path through the fields to Mary’s Wood, planted in memory of the farmer’s late wife. 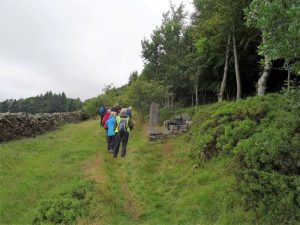 The route then took us over a series of difficult stiles before reaching Leys End Farm where we re-crossed Grane Road and headed over the fields to the bridge that separates two of the Grane reservoirs. 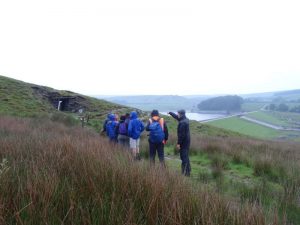 Once at the bottom of the old tramway we took the path on the left, which avoided the steep climb up tramway. From here we had clear views of the reservoirs and the Rossendale Valley before we tackled a steep and uneven footpath up old quarry track where we turned left and made our way back to Hemshore having covered 4 strenuous miles. 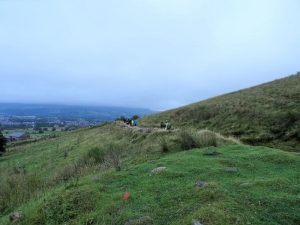