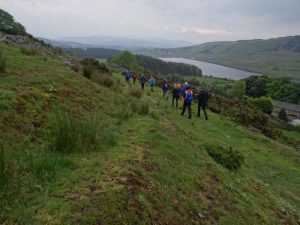 Our meeting point for this walk has normally been the car park at Clough Head Café however, on this occasion Untied Utilities, who usually leave the barrier unlocked for us, had decided to lock the barriers from 5.30pm because of “anti-social behaviour” taking place on the car park. Fortunately, due to the heavy rain during the day, only eleven people turned up for the walk so we were able to park our cars at, the entrance to the car park.

After walking past the barrier we turned right and followed a footpath through the woods until we came to a track overlooking Jamestone Quarry, where there was evidence of stone still being removed from the quarry. Once on the track we turned right and followed a wide green path that skirted around the edge of the quarry eventually descending down onto the access road which leads to the quarries. 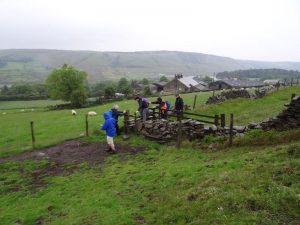 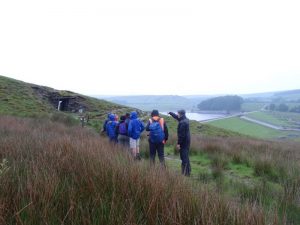 Once across Grane Road we walked through the fields, passing the Water Works on our right with Holden Wood Reservoir on our left, which looked like it needed the rain that was still falling steadily. Still following the WPW we climbed over a ladder stile and headed for the tram way that was used to bring stone down from the quarry on Musbury Heights.

At this point we left the WPW, which climbs steeply up the tram way, and walked through the short tunnel, used by the workers of the quarry to avoid the trucks, and continued along the footpath that passes Ogden Reservoir on our right.

Due to the persistent rain we decided not to go around Calf Hey Reservoir but instead to cross the embankment and head back to Clough Head having covered a distance of 4.5 soggy miles.