WALK 4 of the COME WALIKING SERIES 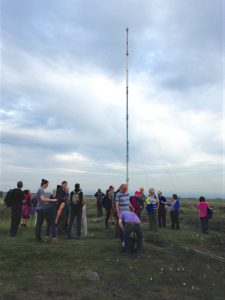 The walk started at the lay-by on the Belmont to Rivington Road and whilst the drivers were parking their cars the rest of us were entertained by an acrobatic owl flying low over the moors.

Once organised thirty-six walkers proceeded by taking the track on the left-hand side of the road called Belmont Road and climbed up to a stile, also on the left, through which was the path leading to the trig point and summit of Winter Hill, that is 1498ft above sea-level. On the way up to the summit a number of walkers reported the sighting of a deer and others were able to take photographs of a wild orchid.

Having reached the summit, we spent some time admiring the 1000ft transmitter tower, built in 1965, to provide most of Greater Manchester and Lancashire with their television programmes. From this point, on a clear day, four national parks are visible, The Lake District, Yorkshire Dales. The Peak District and Snowdonia unfortunately on this particular evening there was a haze which prevented us from seeing these distant hills. However, we could see the sun shining on the Ribble Estuary and the nearby Blackpool Tower.

Leaving the Summit of Winter Hill

Monuments at the summit are reminders of past tragedies that have occurred on Winter Hill. In 1958 a plane crash killed thirty-five of the passenger on a flight from the Isle of Man and in 1838 a young traveling pedlar was murdered on the hill.

Leaving the summit, we made our way down a steep path which headed towards Rivington Road, still enjoying views of the coastline on our left, the Pennines on our right and the farmland of Lancashire ahead of us. 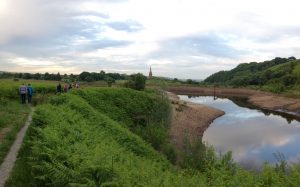 At the bottom of the slope we turned right onto an attractive path, that followed a stream which flowed into The Blue Lagoon, with elderflower and flag irises in full bloom on either side.

At the lagoon we crossed the road and passed through a kissing gate on the other side of the road which led on to a path that climbed up onto the moor with views of Winter Hill to our left and Belmont to the rear. The path also took us back to where the cars were parked, having covered an energetic 5.6 miles