HOLCOMBE MOOR IN THE SNOW 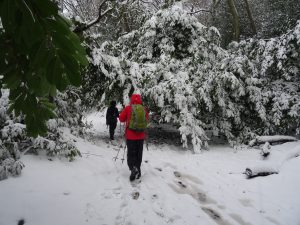 Redisher Woods in the snow

Three brave souls ventured out for this walk despite the overnight snow and forecast for more through-out the day. Although the route was changed we were rewarded with a most enjoyable walk with the added bonus of taking special photos.

The walk started by going through Redisher wood, where the laurel path was so beautiful as every leaf was covered in snow. After a steady climb Peel Tower was reached then on to Pilgrims Cross via Harcles Hill. Up to this point we had followed the only set of footprints crossing the moorland, so were able to avoid the boggy ground hidden by the snow, but as we climbed Bull Hill the footprints disappeared and we made our own way to the tri point. Here we stopped to admire the views before continuing down to Robin Hood’s Well passing Ellen’s stone and cairn on the way. Here Sue even had time to make a small snowman. 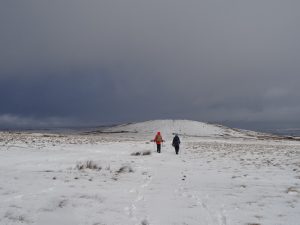 The climb to Bull Hill 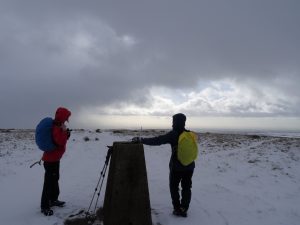 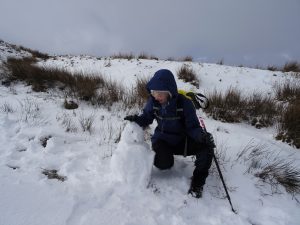 We then headed down the fields crossing Holcombe to Helmshore road to Irwell Vale Railway station. 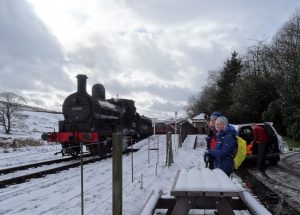 What a surprise we had here! An old steam train and waggons were in the station and men in high Vis jackets were just arriving. They had hired the train to go backwards and forwards on the track so they could take photographs. Everyone was very friendly and as long as we were out of sight in the covered platform area we could eat our lunch and watch the train as it went backwards and forwards in front of us.

We returned back to Holcombe Brook via Edenfield, Stubbins, Nuttall Park and Summerseat.

It had been a very eventful walk not only had we arrived at Irwell Vale at just the right time, but we had seen plenty of livestock on the way including Belted Galloway cattle, pigs, donkeys and sheep one of which had done a very romantic heart shaped in the snow, two days early!