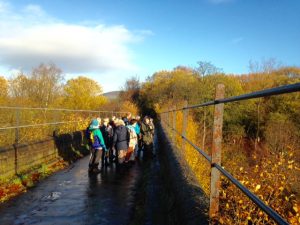 It was another mild and sunny November morning when sixteen walkers, of which four were new to our group, made their way down the Kirklees Trail to the bridge over the Island Lodge. The lodge which used to supply water to the local mills has been a popular fishing site in recent years but now it is so polluted that most of the fish have died and in warm summer months this year an unpleasant smell could be detected coming from the lodge. A meeting has been arranged, by concerned groups, in Greenmount URC Church on Tuesday 20th November 2018, at 8.00pm, to discuss what can be done to clean up the lodge and all are welcome. 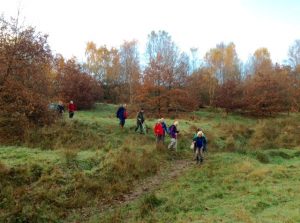 We continued along the trail until we reached a footpath on our left hand side that took us down into Kirklees Valley and over a small footbridge and up into Brandlesholme where we crossed the main road and turned left into Burrs Close where we turned onto a footpath which lead to The Burrs Country Park. 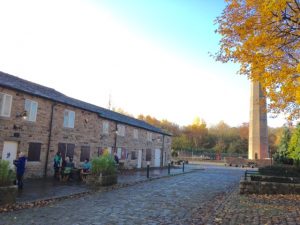 Once in the park we enjoyed a coffee break, unfortunately the Lamplighter Café is closed on Mondays so we had to make do with our own flasks. 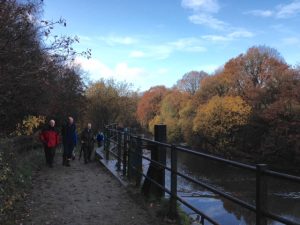 Refreshed we followed the River Irwell up towards Summerseat where instead of dropping down onto Wood Road Lane, we continued along the footpath to Brooksbottom cricket field turning left through an opening in a stone wall and making our way down to Rowlands Road where we walked along the railway platform to avoid a very wet path. 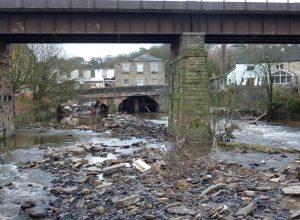 Once at Kay Bridge, Summerseat, we stopped and looked at what was left of the remains of the Waterside Restaurant which was swept away in the foods of December 2015. Some of our group were not aware of this tragedy so I have included a photograph of the event in my report. At the end of the bridge we turned left into Waterside Road and walked under the railway bridge turning right onto a footpath which climbed steeply and turned left taking us to the bottom Holcombe Valley. 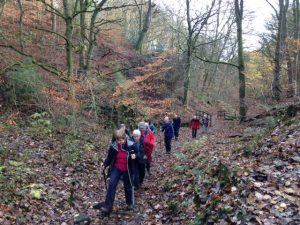 We climbed up through the valley, which was littered with dead trees many of them lying across the footpath. Once in Holcombe Brook we crossed, Bolton Road West and walked along the side of the Hare and Hounds public house and into Redisher Wood. 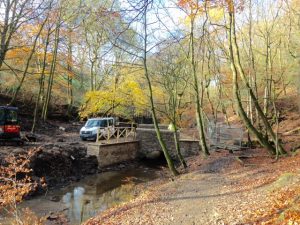 We spent some time looking at the new stone bridge that was being built over Holcombe Brook and we judged that as the bridge opening was so small its aim was to slow the flow of water in times of flooding. Turning left over the old bridge we made our way onto Redisher Lane and down to Bolton Road which we crossed and onto a footpath which lead us through the fields back to Greenmount having covered a distance of just under 8 miles.