This was the ninth of our ten walks to complete the West Pennine Way (WPW) and we started on a grey and overcast morning with twenty-one walkers, a record number for our long walks. We started the walk at the Clough Head Information Centre, where we took the path at the left of the centre and climbed steeply up Nab Hill to join the WPW.  Turning right we followed the way markers across Haslingden Moor, passing Jamestone Quarry on the right below us and after negotiating several muddy sections along the route, we turned right and headed down to Leys End Farm and The Grane Road. 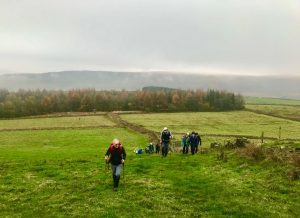 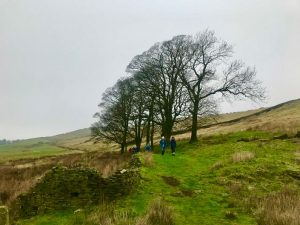 Once across the road we walked down through the fields to the edge of Holden Wood Reservoir and made our way towards the steep slope, of the tramway up to Musbury Heights, but not before having to negotiate our way around a large black bull. The tramway was used to transport the stone, that had been quarried in Musbury Heights Quarry, down to the railway below. At the top of the tramway there is still evidence of the Scrubbing Mill with the old chimney having been rebuilt in 2004. Scrubbing is the process used to smooth the stone that was used for footpaths and building floors. After completing the strenuous climb, we sat in the old ruins to enjoy our coffee stop. 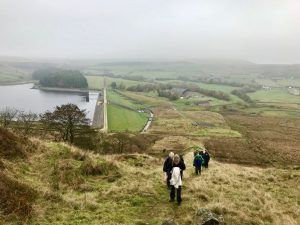 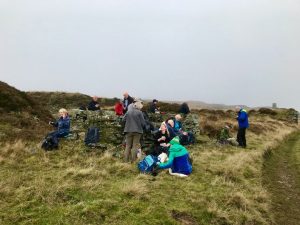 By this time the mist had started to descend, and we were thankful that we had previously checked the route. Following the WPW towards Musden Head we eventually arrived at the point that we were to leave the WPW and start our return journey. Turning left we followed the Rossendale Way, for a short distance before following a stone wall in the direction of Musbury Tor, which was somewhere in the mist. Successfully arriving at the summit, we sheltered in the disused quarry for our lunch stop. 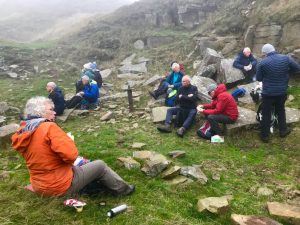 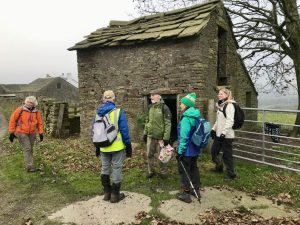 After lunch we headed down the hill towards a very old barn and continued down into Helmshore where we joined the track along the old East Lancashire Railway that went up to Accrington. Once across Helmshore Road we climbed up to a path that passes, Holden Wood Reservoir and Ogden Reservoir and crosses over the WPW at the tramway. On arriving at Calf Hey Reservoir we headed across the embankment and back to Cough Head having covered 10 misty miles. 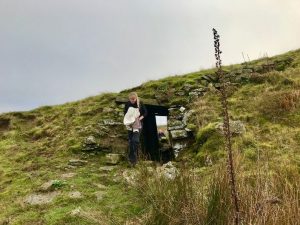 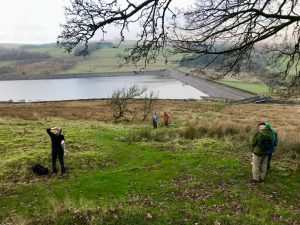