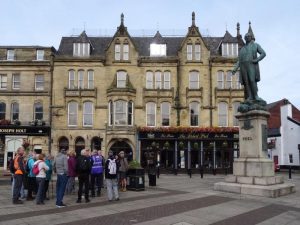 The aim of this walk was to learn more about Sir Robert Peel and his contemporise by passing through the places associated with the history along the route. Twenty-one walkers, of which eight had come in response to the SPRWF leaflet, started the walk at the statue of Sir Robert Peel outside Bury Parish Church.

Before taking the footpath behind the church we were given a brief history about the man and his statue. The statue being unveiled in September 1852 to celebrate some of his achievements after he left Bury as a boy. During his two terms of office as Prime Minister he created the metropolitan police force and changed the corn laws so that the working class people could afford bread. It was interesting to see that his waist coat buttons, on the statue, were fastened the wrong way, for a man, and it is not known whether this was a mistake by the sculptor or in fact Robert Peel may have preferred it this way.

Once through the under-pass we turned right on Castlecroft Road and headed to the site where Peel Mills stood. It was fortunate that one of our walkers had worked at the mill and was able to give us details of the working conditions and show us evidence of building remains.

After crossing the bridge, over the river Irwell, we turned right on Woodhill Road and walked past Calrows Farm where there is a coat of arms plaque on the front of the building relating to James Stanley who was the 10th Earl of Derby from 1702 and Lord Lieutenant of Lancashire as well as being a member of the Privy Council.

Our next stop was at The Burrs Country Park site of Peel and Yate’s mill which was associated with the employment of pauper children from southern counties, a practise that would be seen as slavery today. 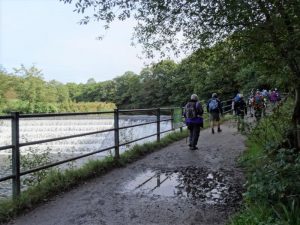 After a short stop for toilets we continued our walk, following the river Irwell up to Summerseat where we carefully crossed the East Lancashire Railway Line. 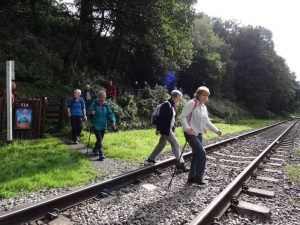 One of our walkers was a volunteer on the railway and he was able to give us details of the history that dates back to 1846. The line was closed to passengers in 1972 and was re-opened as a heritage line in 1987. It now runs 12.5 miles from Heywood through Bury to Rawtenstall.

Once through Summerseat we headed along Robin Road and climbed steeply through Holcombe Valley and into Holcombe Brook where we started the climb up to Peel Tower. On the way up to the tower we stopped several times to admire the views and get our breath back. 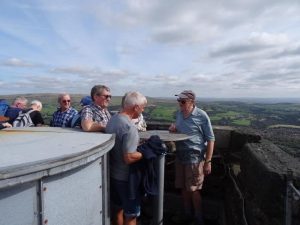 Views from the top

We had borrowed the key to the tower so we were able to climb the 171 steps to the top after being briefed on the its history. The tower was also built in memory of Sir Robert Peel and was opened the day after the statue but the tower was paid for by the people of Ramsbottom. On top of the tower we had good views of the surrounding countryside and our walkers from Yorkshire were pleased to see that they could see “God’s Country” in the distance. 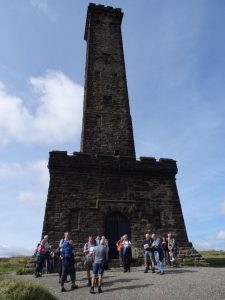 From the tower we made our way back down to Holcombe Brook having covered 6.5 historical miles.