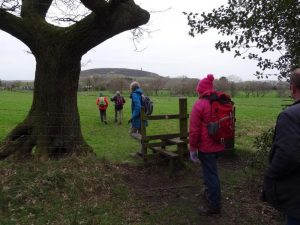 Six walkers left Greenmount Old School on a chilly overcast morning and headed towards the golf club where we followed the West Pennine Way (WPW) in an anticlockwise direction through the fields to Hawkshaw Road.

Once across the road we turned right into Spenleach Lane where we were pleased to see early lambs in the fields and on reaching the barn, a short distance up the lane, there were pens in which even younger lambs had just been born. At the top of the lane we joined a footpath that passed the Range House and headed through the fields to Boardman’s Farm, once the home of Ralph Rooney (1862 to 1949) who was known far and wide for his organised walks and his philosophy of life which is summed up in his book The Story of My Life first printed in 1947 and reprinted in 2011. 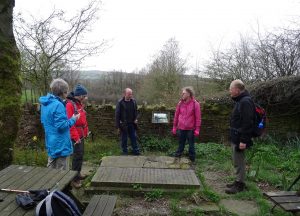 We turned right and headed to the top of Hawkshaw Lane where we turned left to visit Rodger Worthington’s grave, another local legend who was a Baptist preacher, his original gravestone dating back to 1709. Whilst reading the history of RW we took the opportunity for an early coffee break before heading back towards Holcombe Hay Fold Farm where we turned left along a wide track that climbed up to Lark Hill in the direction of Black Moss.

From here we had clear views looking over Holcombe Valley which is thought to be where the first human settlement was established in this area during the bronze age. 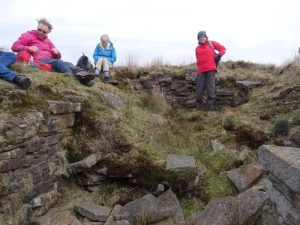 Climbing further onto the moors, but still keeping Red Brook on our right hand side we headed to John Turner’s Cave the third of our local legends John Turner lived at Nabb’s House, now in Greenmount, but spent most of his time on the moors shooting the game. The cave served as shelter for his gamekeeper and opposite the cave is a coal seam which it is thought was used to provide fuel for the cave.

Again we took advantage of the pause to have another coffee break before heading around the back of Bull Hill and onto the WPW Link Route that took us down to Robin Hood’s Well.

Following the WPW Link we walked down through the fields to Lumb where we were pleased to see very small piglets yet another reminder that spring is here. Crossing the bridge over the river Irwell we turned right and then left through the Subway where we left the WPW and followed the river down to Chatterton but not before eating our lunch sitting on a banking in the sunshine.

Once through Chatterton we continued to follow the river down into Ramsbottom where we walked through Church Fields onto Bolton Road which we crossed and turned right into Dundee Lane where we joined a footpath at the back of a small housing development which took us into Tagg Wood. At the far end of the wood we joined Lumb Carr Road and headed down to Holcombe Brook and home having covered 10 historic miles.