5th of 10 circular walks to complete the West Pennine Way

On a gloriously sunny morning, nineteen walkers joined the West Pennine Way (WPW) at Roddlesworth Information Centre, to complete the next section of the WPW. Once through the village we started the steady climb up to Jubilee Tower, officially known as Darwen Tower. The tower was completed in 1898 to commemorate Queen Victoria’s Diamond Jubilee and celebrate the victory of the local people being able to gain access to the moor. The tower has recently been closed whilst major renovation work has been taking place, but it is hoped that it will soon be open to the public so that once again we can enjoy the glorious views from the top. 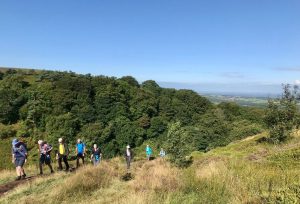 Climb up to Darwen Tower 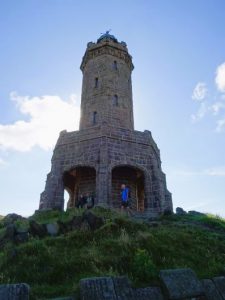 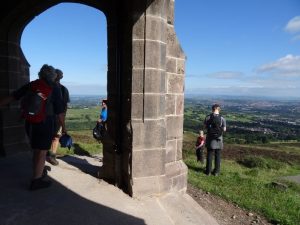 Views from the tower

After admiring the tower for some time, we headed across the moor, following the orange way-markers, and finally descending to Prospect Farm where we turned right, completing this section at Bull Hill.

Before climbing back up onto Darwen Moor, to start our return journey, we stopped to have our coffee break at the side of a shaded ancient track. 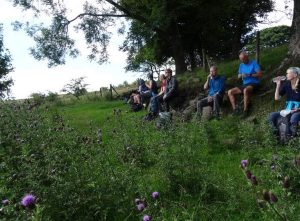 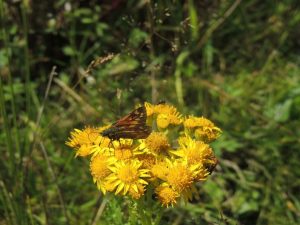 At the top of the track, we turned left, over a stile and headed across the fields to join the Witton Weavers Way (WWW) where after walking for a short distance we joined a narrow path on our right and made our way over the moors to our next destination, the site of aircraft remains. The remains are those of a Mustang aircraft that was part of the RAF Polish Squadron flown by, Herbert Noga, which crashed on the 29th of July 1945. 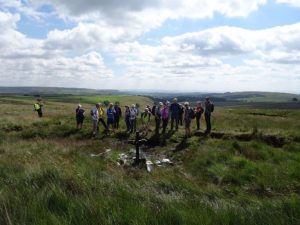 From the crash site we continued over the moor until we re-joined the WWW, where we turned right and followed it until we reached one of our favourite places to have lunch, along side a stone wall with good views overlooking Winter Hill.

After lunch we re-traced our steps for a short distance to join a muddy path that took us up to Cartridge Hill. Whist it is not a particularly high hill (402m) it has the distinction, that on a clear day you have a 360-degree view of the West Pennines. We could just make out some distant mountains and coastline, through the mist, but the three towers of Darwen, Peel and Blackpool were visible plus we had a clear view of a large buzzard circling overhead. 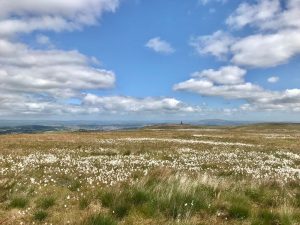 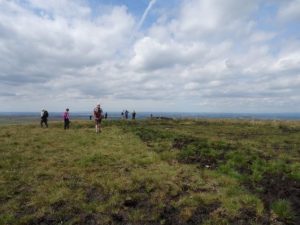 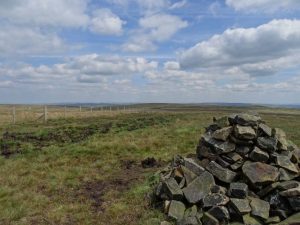 Finally, we joined a track that took past Stepback Brook and back down to Roddlesworth having covered 10 sunny miles. 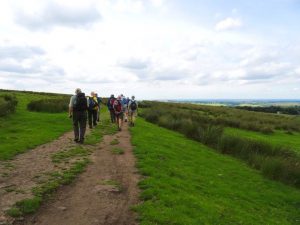