On an overcast and cold morning, more like January than July, five walkers left Ramsbottom Railway Station car park and headed along Kenyon Street and through the fields in the direction of Shuttleworth. After crossing Edenfield Road we took a track which lead us behind St John in the Wilderness Church where we turned left through a stile and onto a footpath that eventually joined Riding Head Lane near Fisherman’s Retreat Restaurant.

From here we climbed up onto Rochdale Road which we crossed and climbed over a stile onto a footpath that joined Coal Road. Once on the lane we climbed up onto Scout Moor making our way past the turbines which were turning steadily in the strong breeze. 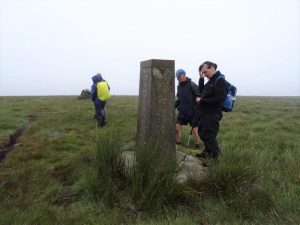 By this time the visiabilty was limited and the wind and rain had increased in strength but we continued on towards the aptly named Hail Storm Hill and on over to the trig point at Top of Leach.

It was our intention to stop for a coffee break at the trig point but the weather was so bad that we decided to come off the moor and instead dropped down onto Rooley Moor Road where we turned left and followed the West Pennine Way Link Route (WPW) in a westerly direction. The road is also known locally as the Cotton Famine Road as it was built by Rochdale cotton workers who were unemployed due to the lack of cotton as a consequence of the American Civil War in the 1860s. 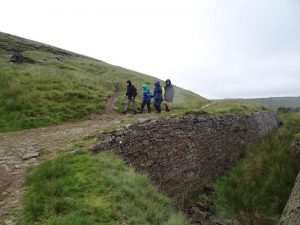 As we headed for the disused Cragg Quarry the visibility had improved and we could see the Rossendale Valley below us. Once through the quarry we followed the WPW skirting around Cowpe Lowe and turning left onto Sand Beds Lane where we continued to descend until we reached Gin Croft Lane.

Leaving the WPW we turned left and headed down the lane to Dearden Clough and The Plunge where we stopped for a welcome lunch. By this time the rain had almost stopped so we were able to enjoy the views of the stream flowing over the water fall whilst we ate our lunch.

Having been refreshed we continued along the footpath onto Michael Wife Lane and eventually down to Rochdale Road which we crossed and turned right onto Bury Old Road walking as far as Bleakholt Animal Sanctuary where we turned right onto a footpath that descended down to Endenfield Road.

Once across the road we joined a track that took us down into Stubbins where we headed through the fields back to Ramsbottom having covered 12.5 wet and windy miles.