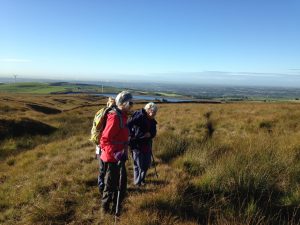 Only four walkers met at the layby opposite the Owd Betts Public House on a sunny chilly morning. After crossing Edenfield Road we made our way onto Ashworth Moor, on which a new pipeline had been laid, where our attention was drawn to a large drone that appeared to be surveying the length of the pipe. 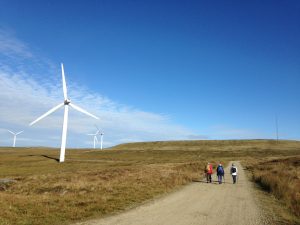 We then walked along Cheesden Edge and headed for the Scout Moor Wind Farm, where the size of the turbines never ceases to amaze us. From here we had good views over towards Peel Tower, Winter Hill and the Rossendale Valley. 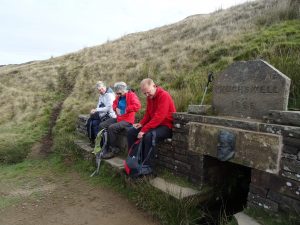 Once over the moor we made our way to Foe Edge and our coffee stop at Waugh’s Well, where we were surprised to see that two other walks had already stopped for coffee at the well. The well is a memorial to Edwin Waugh, (1817 to 1890), who was a local poet and son of a Rochdale shoe maker. It was said of him that he was “Lancashire’s Burns” and he lived for a time at Foe (or Fo) Edge Farm which is now in ruin. It was good to see that his face had been replaced on the memorial.

Again there were extensive views from Foe Edge looking over the reservoir we could see Jubilee Tower at Darwen and in the distance to our right, Pendle Hill. 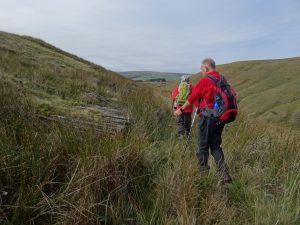 From the well we descended into Scout Moor Bottom and once across Scout Moor Brook our aim was to walk along an old tramway around the side of the moor which in places was overgrown making progress difficult.

Lunch at The Plunge 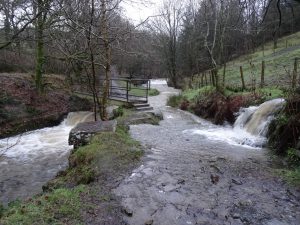 The Plunge in flood

Turning right at the end of the tramway we joined a path which dropped down into Dearden Clough and The Plunge, where we stopped for lunch overlooking the stream which can be a torrent in wet weather.

After lunch we headed back to Edenfield Road, which we crossed onto Bury Old Road and made our way passed Bleakholt Farm, where we stopped to admire twelve healthy looking donkeys that we thought could have been sent here to retire, not a bad retirement home. Our route them took us passed the Fisherman’s Retreat and along Riding Head Lane back onto the main road where we turned right into Black Lane, aptly named as it was almost invisible. 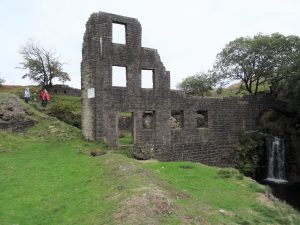 Eventually we arrived at Cheesden Brook where we spent some time looking at the remains of Cheesden Mill before headed back to the car park having covered an interesting and varied 10 miles.