This walk had been identified by GM Transport as one of their five top walks in the May Walking Festival and as a consequence we gained an extra two walkers to our regular group. Starting the walk at Ramsbottom Railway Station we headed along Kenyon Street and through the fields to Stubbins where we followed the footpath along the river to Strongstry.

We spent some time admiring the spring flowers which made the little hamlet look glourios in the bright spring sunshine.

From Strongstry we climbed up through Buckden Wood, crossing Helmshore Road and on to Moor Bottom Road where we turned right and made our way to Robin Hood’s Well. 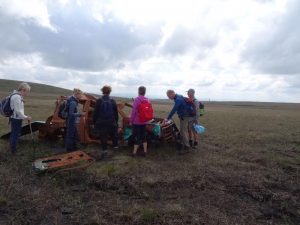 The Well is on the Link Route of the West Pennine Way (WPW) which we now followed up to Ellen’s Cairn where we found that one of our way-marker posts was in need of TLC. Once the post had been repaired we followed the path around the back of Bull Hill stopped for a coffee break before heading across Wet Moss. On Wet Moss we passed, what was left of, a car which has become a landmark over the years as it had been abandoned so long ago.

Field of buttercups and daisies

With no obvious footpath we headed in the direction of Winter Hill mast and soon arrived at the Maggot Factory which could be identified by its usual smell. Turning left on the track we headed for Longshaw Head Farm where we climbed over the stile into the farm yard and decided to try to find a much neglected footpath to the left of the farm. With difficulty we managed to follow the path having to climb over a stile that was in need of some serious maintenance however we were rewarded as the end of the path we passed through a beautiful field full of buttercups and daisies.

Our next stop was at Roger Worthington’s Grave where we stopped for lunch. Roger Worthington was a Baptist preacher who died in 1709 and having loved the moorland throughout his life expressed a desire to be buried there. 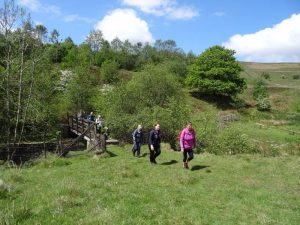 Once refreshed we headed for Holcombe Hay Fold Farm and into Holcombe Valley where the Hawthorn blossom looked like snow on the trees. After crossing the bridge, over Red Brook, we climbed up to the dig site of Holcombe Moor Heritage Group (HMHG).  HMHG carry out archaeological excavations each year in the Holcombe Valley. 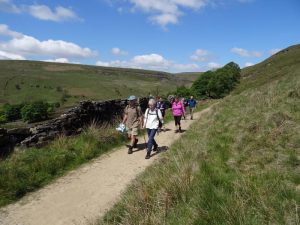 Heading back to Holcombe

From the dig site we climbed up to Moor Bottom Road and turned right following the track into Holcombe Village where we joined the Link Route and walked down through Top Wood onto Carr Street here we turned left and headed back into Ramsbottom. GM Transport were right to judge this walk in the best five, as it had been a glorious 10 miles.