After the recent heavy rain is was decided to change the planned route to one that followed as many farm tracks as possible. With that in mind we started by walking down the Kirklees Trail as far as Shepard Street where we turned right and crossed Holcombe Road and headed for Old Kay’s Park. At the top of the park we made our way across Turton Road taking the first muddy path up onto Cann Street and on up to the fields overlooking Tottington. The footpath crossed several very wet fields before arriving at Watling Street. 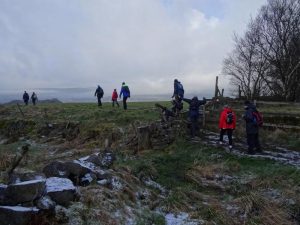 Once we had climbed over a stile, onto the road, we headed in the direction of Affetside walking as far as Mum Harris’s Farm, on our right, where we tuned left and headed down a farm track, until we reached a stile, that took us onto a footpath leading to Top o’ th Knotts. Whilst walking through the fields we had clear views over to Winter Hill as by this time the sky had cleared and the sun was shining.

From Top o’ th Knotts we turned right and joined a footpath to Cromtons Farm which is on the West Pennine Way (WPW). Following the WPW we headed down to Bradshaw Road and following the footpath through the attractive Kingfisher Valley to the Jumbles Reservoir. 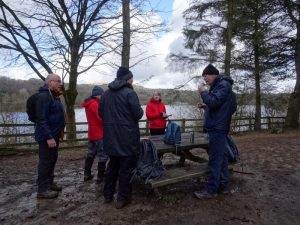 By now it was coffee time so we took full advantage of the picnic benches, overlooking the reservoir to enjoy our refreshment. Once refreshed we continued along the WPW as far as the concrete bridge where several of our group went to look at the fossiled tree whilst the rest of us enjoyed the sunshine on the bridge. It is thought that the fossiled tree dates back 300 million years and that it grew in a tropical rain forest similar to the mangrove forests of today. 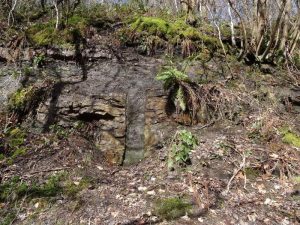 Leaving the WPW we followed Bradshaw Brook up to Vale Street where we turned left and after passing through the small housing development we joined a footpath on our right which crosses over an attractive iron bridge and leads to Blackburn Road in Turton Bottoms. After crossing the road, we turned right walking up to the Black Bull where we turned left onto a footpath that leads to Wayoh Reservoir. We were pleased to see that the steep footpath, leading from the embankment, had been replaced by a series of stone steps. 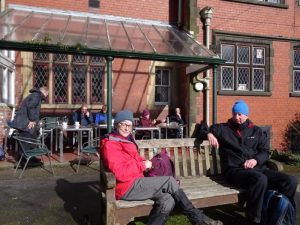 Lunch at The Barlow

When we reached the top of the steps we turned right and headed across the fields to The Barlow in Edgworth where stopped for lunch. The Barlow Memorial Institute, as it was called, when it opened in 1909, was built in memory of James and Alice Barlow by their children. The most notable of which was Sir Thomas Barlow (1845-1945) who was Royal Physician to Queen Victoria, Edward VII and George V. The building provided a valuable resource to the community as The Barlow still does today. 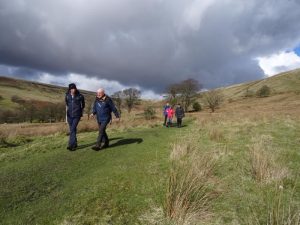 After lunch we walked up into the village where we turned right walking as far as the Rose and Crown Inn before turning left at the sign post to Brooky Moor. Following the track past Heyhead Farm we eventually joined Plantation Road where we turned right and walked up to and around the back of Red Earth Equestrian Centre. From here the track climbs steeply and after a short distance we turned right onto a narrow footpath that took us to the top of Hawkshaw Lane and Roger Worthington’s grave.

Continuing past the grave we headed for Holcombe Hey Fold Farm and on to Cinder Hill crossing some very muddy fields before crossing the footbridge over Red Brook. It was sad to see that some of the flood defences, recently erected, had been demolished by the heavy rain. Once on the Ridge we again joined the WPW crossing the stepping stones and climbing up to Redisher Lane where we rescued a footpath sign before joining familiar footpaths back to Greenmount having covered 12 surprisingly sunny miles.