GREENMOUNT TO EDGWORTH AND BACK TO GREENMOUNT

It felt as though Spring was in the air when five walkers left Greenmount Old School on the Monday Walk. We took the path through Greenmount Golf Club and on towards Croichley Fold dropping down into Two Brooks Valley and on up to Turton Road, past Burnt House Farm, which appears to be at the first stage of renovation. The path we took to Affetside was much dryer than the last time we walked it and we arrived in the village in bright sun shine. The route down to Jumbles Reservoir gave us clear views of Winter Hill and the surrounding moors. Jumbles was our first refreshment stop where we had to drink our own coffee as the Information Centre was not yet open. Leaving Jumbles we walked though the valley towards Turton Bottoms, where we were pleased to see that the bridge that was destroyed during the 2015 winter floods had been replaced. We stopped to eat our lunch around the cricket field at Barlow Institute in Edgworth where the temperature was like a hot summers day, so much so we all had to buy ice creams at the village shop in order to cool down before we could continue our walk. Our route through the fields, in which we saw Lapwings and Curlews, lead us on to Hawkshaw Lane and towards Spenleach Lane. The fields in and around Hawkshaw where filled with ewes and their lambs, which had very recently been born. This sight caused members of our group to suggest that we should call this walk The Lambing Walk. On returning to Greenmount we had covered 10 miles. 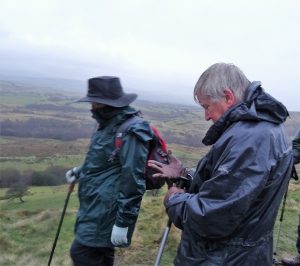 She said it was only 4 miles

Greenmount Village Community Walking Group (GVCWG) were asked to organise three walks as part of the Greater Manchester Transport Walking Weekend. The first of these walks started from the Hare & Hounds Pub in Holcombe Brook on a rainy Friday evening and on reflection we might of been wise to go into the pub. There were five of us in the group, all members of the GVCWG and as such use to walking in the rain. The route took us up to Peel Tower and on to meet the West Pennine Way which crosses Holcombe Moor at this point. We then walked down into Redisher Woods where we met a number of obstacles. The first of these was a fallen tree which was blocking the path and further on the swollen river made it difficult to cross the stepping stones, with at least one member of the group getting wet feet. We then followed the stream through the woods past Simon’s Lodge and on to the bright lights of the Hare & Hounds Pub having covered approximately four wet miles. It was sad to see the number of fallen trees in the wood but the sound of an owl lifted our spirits. 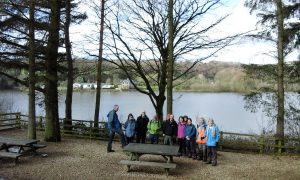 What a difference a day makes. Saturday was dry and sunny when we started the second walk from the Pack Horse Hotel in Affetside. The sun had brought out thirteen walkers five of which were new to the group. We began by walking along the Old Roman Road to the Market Cross in the centre of Affetside were we noted that the heron was in the same position in the village pond as the last time we were in Affetside. The route then continued through the fields, were we enjoyed clear views looking across to Winter Hill and the West Pennine Moors. We then descended to the Jumbles Country Park were we made the most of the sunshine and refreshments. The return route took us along the reservoir and to the right climbing up to Bradshaw Road and on back to Affetside. The distance was approximately four miles but they were sunny miles.

At least we enjoyed one sunny day. Sunday was a wet and overcast day in Greenmount which reduced the number of walkers to five, three of which were new to the group, but wise enough to wear Wellington Boots. The walk started at Greenmount Old School making our way towards Greenmount Golf Club and on to Hollymount, where we met members of Incredible Edible pruning the apple trees in the orchard. We then descended down the slippery slope to the river in Bottoms Hall past the Hansel and Gretel house to the steep slope up to Turton Road. The route crossed the road and went past Windmill Farm and onto the moors and the notorious Yeoman’s Field, where the Wellington Boots were needed. At Affetside we turned right passed the Pack Horse and down the path to the Two Brooks Valley. The return route took us through Croichley Fold back via the Golf Club, having covered a distance of approximately for miles.