This month’s walk was the first of our annual walks to complete the West Pennine Way (WPW) and allowed us the opportunity to include the recently designed alternative route from Clough Head.

Starting from Clough Head Information Centre and Café, nine walkers crossed the busy Grane Road and followed the alternative route down to Calf Hey and onto the embankment that separates Ogden Reservoir from Calf Hey Reservoir. It is hard to believe that this valley was once home to 1300 people, in the early 19th century, earning their living through farming, weaving, quarrying and illicit whisky distilling. The building of the reservoirs, the last of which was built in 1912, forced the communities to move into the neighbouring towns.

Once across the embankment we climbed up the side of the valley and turned right onto a footpath which took us into an attractive conifer plantation where we climbed over a stile and turned left and followed the footpath, climbing steeply through the wood. At the top of the valley we stopped to admire the views back across to Clough Head whilst an additional way marker was attached to a post.

The route, which is part of The Clogger’s Way, now crosses Bentley Moss and is made easier by having paving stones part of the way, to our right we had clear views of the trig point on the summit of Hog Lowe Pike (383m). After climbing over several stiles we started to drop down through the buildings of Uglow Farm onto Broadhead Road. We now turned right and walked along the road for a short distance before joining a way marked footpath, on our left, which took us through some very muddy fields before crossing Cloughhead Brook. 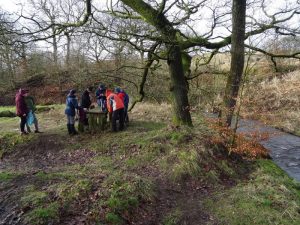 From the footbridge the route passes through an archway built into a farm house and eventually turns right down to a very pleasant dell that is equipped with a picnic bench which we took advantage of to have our morning coffee break. 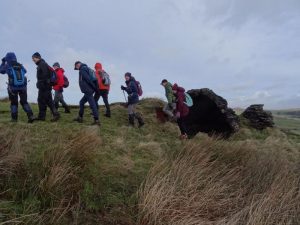 After coffee we decided to deviate from the route at Lower House Farm to take a look at two disused coke oven. The ovens were used in the early 19th century to convert coal into coke, the coke being used in the iron and steel industry.

Back on the WPW, original route, we past Longshoot Farm and headed along the track toward Pastures and Lower Pastures crossing over several fields where we had difficulty negotiating the deep ditches. 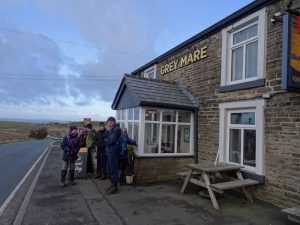 Arriving in the hamlet of Pickup Bank we walked through the very attractive Chapel Gardens before re-joining Broadhead Road and heading for the Grey Mare Inn and a well deserved lunch.

After an enjoyable lunch we turned left on Grange Road and walked along the verge which was sadly littered with items discarded by passing motorists. 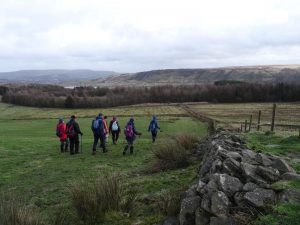 Once we arrived back on the WPW we climbed over Rushy Hill where we could not only see the wind turbines on Oswaldtwistle Moor but we could hear them. On our right we had good views over to Musbury Heights and to the Rossendale Valley beyond.

When we could see Clough Head Café below we left the WPW for another day and headed down the steep slope to where we had parked our car having covered 10 productive miles.