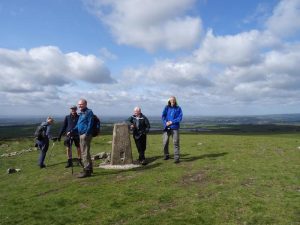 On a bright but chilly morning six walkers set off from the lay-by opposite the Old Betts Inn on Edenfield Road. Once safely across the road we started the steep climb up to the trig point, on Knowl Hill (419m) where we had clear views looking over the West Pennine Moors and beyond to the Fylde Coast. Heading past the large wind turbine on Scout Moor we headed in the direction of the Naden Reservoirs.

The three Naden reservoirs were built by the Heywood and Middleton Water Company in the middle of the nineteenth century. The final and largest reservoir, the Greenbooth, was completed in 1961 and it entailed flooding the village of Greenbooth.

The footpath into Norden dropped down through a steep valley and climbed up into a new housing estate from where we crossed Edenfild Road into Wolstenholme Fold passing what was once an owl sanctuary and onto a very overgrown footpath leading to the head of the Naden Valley. 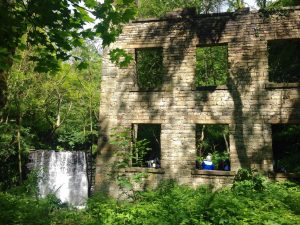 Once into the valley we passed the ruins of one of the very many mills which made use of the Naden Brook for their power and cotton production. Further down the valley we made use of one such mill to have our morning coffee break enjoying the views of the water fall and birds skimming over the surface of the water. 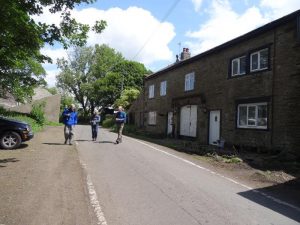 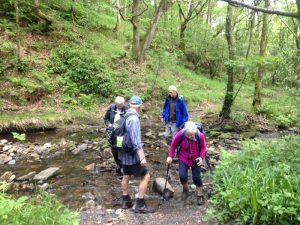 One of the many crossings

Following the path through the valley, which in many parts was overgrown and not evident, also crossed the brook in several places with only once having the luxury of a bridge. 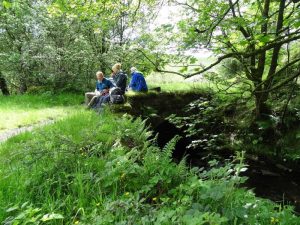 On reaching the ruins, which include a chimney, of Washwheel Mill we decided to have a lunch stop on dry land. The mill was the last of fifteen to close in Cheesden Valley and was used to bleach cotton. 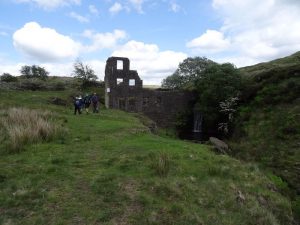 After lunch we continued to walk through the valley up to Deeply Valley, the site of annual free rock festivals in the late 70s and early 80s. At the head of the valley is the last of the ruined mills, Cheesden Close Upper Mill and from here it was a short walk back to the Owd Betts Inn having covered 10 adventures miles.