What a contrast to last month’s walk that started in glorious sunshine, were as this morning thirteen walkers left Turton Tower on a raining and overcast day. Following the way markers over the railway bridge to join the Witton Weaver Way where we walked as far as the first gate on our left and we started the climb up to the trig point on Cheetham Close. Unfortunately, this morning we did not have the views over the West Pennines due to the low cloud. 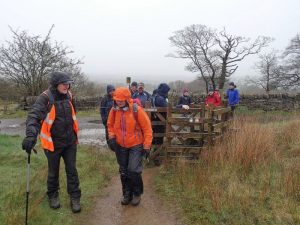 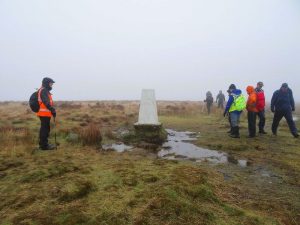 Once off the moors we made our way down to Dimple Hall that was built in 1668, during the reign of King Charles II and upgraded during the Georgian period. In 1966 the owner divided the house into two homes and. In the field opposite the hall we were lucky enough to see a herd of seven roe deer but they made a hasty retreat when we arrived. 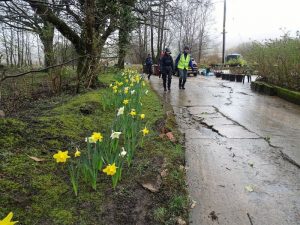 After crossing Blackburn Road, we headed passed Delph Reservoir and onto Longworth Road where we turned left and walked down as far as Higher Critchley Fold Farm and followed the WPW route into Longworth Clough. There where signs of spring everywhere with new growth on the trees. Before leaving the clough, we made use of some industrial ruins to have our coffee stop. 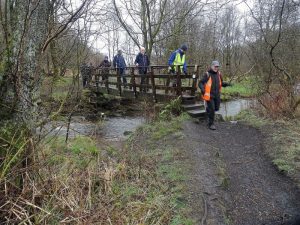 At the end of the clough, we reached the Ornamental Reservoir, once to provide water for the cotton mills, where we climbed out of the valley following the WPW to Belmont and sat on the wall at San Marino’s restaurant for an early lunch. 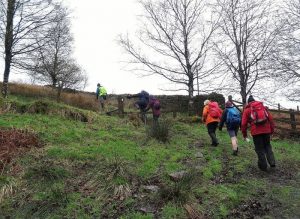 Climbing out of Longworth Clough 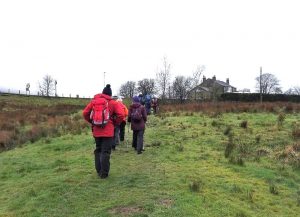 This was the end of the second section of the WPW route and from here we headed back to the start of the walk. After walking a short distance along Belmont Road, we headed down the track to Greenhill Farm and back into Longworth Clough retracing our route as far as the footbridge, which we crossed and climbed out of the valley. Once across the road we made our way through Longworth Hall Plantation and back to Dimple where we walked along Cox Green Road turning left up the track to Whittle Hill Farm. From here it was a short distance, across the golf course, passed Tor Barn to Turton Tower, having covered 10 energic miles. 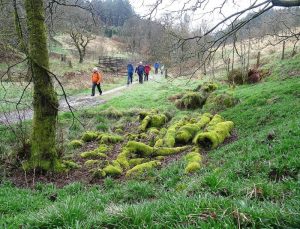 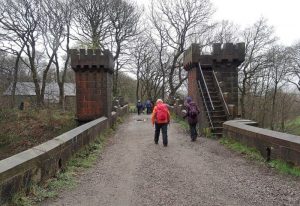 Back to Turton Tower