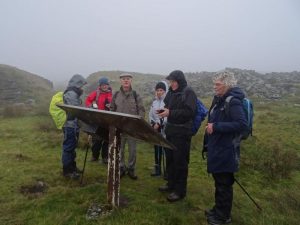 This walk started from Rawtenstall where six walkers parked their cars in Victoria Street just off Bacup Road. The morning was dull and misty with a forecast of more rain to come. We headed along Hill End Lane, having first decided not to climb the steep tramway which appeared to be very overgrown. We joined the tramway at the top of the lane and continued along its route across the moor to the site of Cloughfold Quarry and Stone Mill. The site was opened in 1868 and consisted a saw mill that cut to size large blocks of stone from the nearby quarry and a polishing mill that smoothed the surfaces of the flagstone before being transported down the tramway to the railway below. 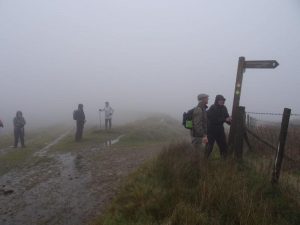 From the ruins we headed across the moor with the intension of climbing to the summit of Cowpe Lowe but as the mist had thickened at this stage we continued across the moor until we joined Sandbeds Lane, which is part of the West Pennine Way Link Route (WPW). Turning left on the lane we made our way to Rooley Moor Road, first repairing a direction sign along the way that contained way-markers for the WPW. 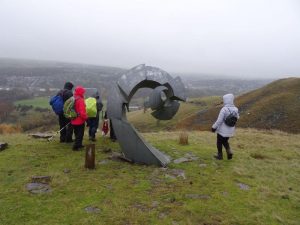 Still following the WPW Link Route we had views of Cowpe Lowe Reservoir to our left and as the mist had started to clear we could now see the Rossendale Valley in the distance. Eventually we turned left, leaving the WPW and headed towards Lee Quarry and Cragg Quarry formally working quarrys in Bacup, now developed with mountain bike trails and footpaths. The Valley of Stone project also includes a series of sculptors the first of which we stopped to admire whilst having a coffee break. The sculptor, which is visible from Stacksteads, is said to depict the heritage of the area and highlights the stunning views around the quarry.

The views across the moors were enhanced by the vivid oranges of the bracken contrasted against the streams and ruins of bygone days. Once through the quarry we joined a track which took us down onto Newchurch Road where we took advantage of the “Eat In-Take Away”cafe to eat lunch and to dry out.

After lunch the lead was taken by one of our group that had lived in the area since his childhood waking first along the busy main road before turning left along Clough Street where we joined the River Irwell following its route through the quiet streets. At one point we cross Stacksteads Football Ground where our leaded had spent many happy hours in his youth. 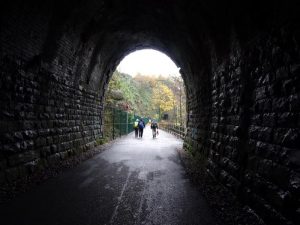 Once across the field we joined The Valley of Stone Greenway which is one of four routes that make up the East Lancashire Strategic Cycleway project. Included in this route, at Waterfoot, are two railway tunnels, part of the East Lancashire Railway which were closed in the 1960s and have recently been unbricked and restored as footpaths with street lighting. It was just a short walk from the tunnels back to our parked cars having covered 10 historical miles.