Just as the rain stopped and the sun came out five walkers, two new to the group, set out from Greenmount Old School and headed across the golf course to the club house where we followed the West Pennine Way (WPW) markers in an anti-clockwise direction through the fields to Bolton Road, Hawkshaw. Once across the road we continued along Spenleach Lane in the direction of the MOD Range House, where we left the WPW, following the path alongside the building and through the fields to Higher House Farm where we turned left and walked down Hawkshaw Lane for a short distance before climbing over a steep stile on our right.

Once in the fields we followed a path over the hill known as Top o Qualton and on to Qualton Fold Farm, where there was still evidence of building work taking place. From the farm we followed the track past Walves Reservoir to Bury Road.

After walking down the road for a short distance we turned left and joined a footpath that avoided a long section of the road which we later joined for a short distance before turning left onto another path that which eventually came out at The Barlow in Edgworth, originally known as Barlow Institute where we stopped for a coffee break.

Refreshed we made our way down to Turton Bottoms turning left into Birches Road and after passing some attractive cottages known as ‘Sink Row’ we turned right onto a footpath. The path took us over an attractive wrought iron bridge and into Vale Street where we turned left and after a short distance we turned right and followed Bradshaw Brook through an attractive valley to Jumbles Reservoir where we ate our lunch on a pick nick table. 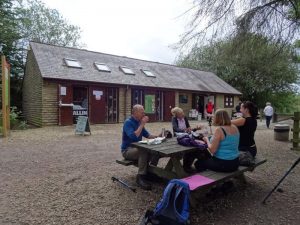 After lunch we joined another section of the WPW that would eventually take us back to Greenmount but before then we had more miles to walk. At the far end of Jumbles car park we dropped down into King Fisher Valley where we turned left and walked down to Bradshaw Hall Fisheries turning left again we walked up to Bradshaw Road.

Once across the road we headed up the track that took us through the Cromptons and up to Affetside where we stopped to admire the memorial garden which looked especially glorious with the wild flower meadow in full bloom. It is said that the cross marks the supposed halfway point between London and Edinburgh with its origin still remaining a mystery though it is thought to date from medieval times or earlier.

Turning right down Watling Street we walked down to Mum’s Harris Farm where we turned left and followed the path into Yeoman’s Field which for once was dry. At the top of the field we stopped to look at the 360-degree view and identified some of the familiar locations starting with Darwen Tower in the west, around to Peel Tower, Cowpe Lowe, Scout Moor Wind Farm, the skyline of Manchester and over to the east the Derbyshire hills including Man Tor. At this point one of our new walkers exclaimed that this was the best walk she had ever been on. 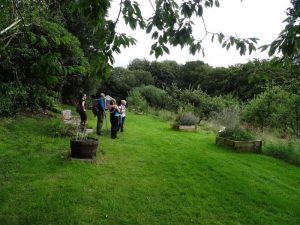 Back at the orchard

The path then took us past Windmill Farm, which is starting to look magnificent after all the renovation work. Once across Turton Road we headed down the steep footpath which drops steeply down into Two Brooks Valley with the descent being made more difficult because of all the overgrown vegetation. After climbing out of the valley we spent some time looking at Holly Mount Orchard before heading back to Greenmount having covered 11 rewarding miles.