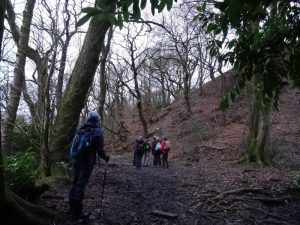 The first long walk of the year started outside the Hare and Hounds Inn in Holcombe Brook with eight walkers making their way into Redisher Wood. After a short distance we took the footpath on our right and started the first climb of the day, part way along the path we caught a glimpse of the white tail of a deer heading out of the valley. Once at the top of the climb we joined a footpath leading to Hay House, which we had not walked before. Hey House was built by Robert Brown in 1616, probably as a hunting lodge for the de Trafford family. It is also probably the site of the first kennels for the hounds of the Holcombe Harriers which became the Holcombe Hunt. After climbing the steps onto Moorbottom Road we turned right onto a steep footpath leading up to Peel Tower. 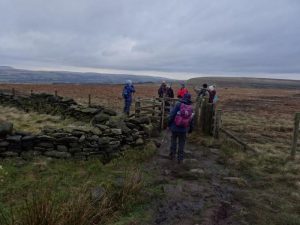 At the tower we stopped to get our breath back before taking the path behind the tower which heads over towards Holcombe Valley. On reaching a stile at the corner of a stone wall we made our way across the wet moorland joining the track that follows the “Grey Wall” in the direction of Harcles Hill and onto Pilgrims Cross. 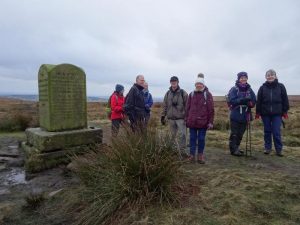 The cross dates back to before 1176 although the original stone was removed by vandals in 1901 and was replaced by the present stone in 1902. It is said that the cross marks the route pilgrims took on their jounney to Whalley Abbey. 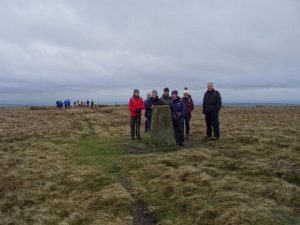 As the MOD red flag was not flying we continued along the foothpath that leads to the trig point on the top of Bull Hill (418m) where we stopped to admire the views which on a clear day extend from the Pennines across the Manchester basin and Cheshire to the Clwydian Hills and the Wirral with Jodrell Bank radio telescope also visible, sadly today was not a clear day so we had to make do with the more local landscape. 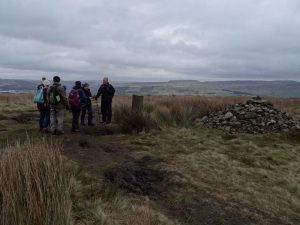 After leaving the trig point we headed down the hill passing Ellen Strange’s memorial, erected 1978, which is said to mark the stop where she was murdered in January 1761. Her husband was subsequently arrested but was released due to insufficient evidence. Once on Moor Road we turned left towards Robin Hoods Well, where we stopped for a coffee break. The well being another relic from pilgrim times. After coffee we continued down the track and headed to Crankshaw Fold and into Sunny Bank before joining Holcombe Road in Helmshore where we enjoyed a well-deserved lunch at The Village Store, which is a great location for tired walkers. 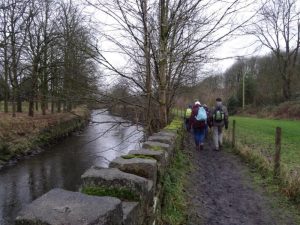 On leaving the restaurant we found that, as was forecast, the rain had started to fall so after donning our waterproofs we headed down to Snig Hole Park and joined a newly refurbished footpath following the River Ogden down to the Lumb Viaduct, which was part of the Lancashire & Yorkshire Railway line from Ramsbottom to Accrington built in 1848, closed in 1966 and refurbished in 2015. Our route then followed the River Irwell through Strongstry into Stubbins and on into Ramsbottom where we walked through Nuttall Park to Summerseat and after climbing through Wood hey valley we reached our starting point in Holcombe Brook having covered 10.5 miles steeped in history.