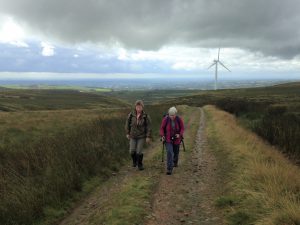 Only four walkers, one of which was new to the group, set off from Ramsbottom on a cool and damp Monday morning after a night of very heavy rain. We crossed the railway line and made our way along Kenyon Street passed the new recycling plant and onto the footpath behind the, recently closed, soap factory. Following the river to Stubbins we had to make a detour as the fields were flooded, a result of the heavy rain. The route then turned right passed the new campsite and up to Shuttleworth where we crossed the main road and made our way up Riding Head Lane to the Fisherman’s Retreat Restaurant which had been extensively developed since 1992 when it was opened to meet the needs of local fisherman trying to catch fish in the trout ponds. 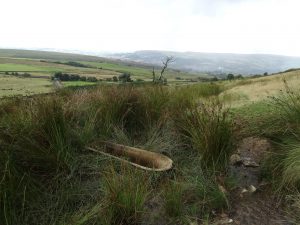 Bath with a view

After the restaurant we made our way up to and across Rochdale Road onto Coal Road, which was used for taking coal down from the moors in the early 19th century. From here we climbed up to the wind turbines which were making disturbing noises and it was suggested that WD40 might solve the problem and to the top of Scout Moor were the views looking back towards Ramsbottom were quite spectacular. All over the moors there was evidence of the heavy rain making the paths more like streams so we decided to make for Waugh’s Well and an early lunch. The well is a memorial to Edwin Waugh, (1817 to 1890), who was a local poet and son of a Rochdale shoe maker. It was sa 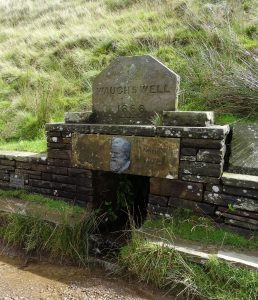 id of him that he was “Lancashire’s Burns” and he lived for a time at Foe Edge Farm, which is now in ruin. We enjoyed extensive views over to Dawen Tower, Winter Hill and Holcombe Moor whilst eating lunch but the wind made it feel more like an April day.

From here we made our way towards Sand Beds Lane, which is part of the West Pennine Way Link Route, and made the steep climb to the summit and trig point at the top of Cowpe Low at a height of about 1400ft. The views from the summit were the best of the day and included, Haslingden Reservoirs, Pendle Hill, Musberry Tor, Longridge Fell and to our left the Welsh Hills. 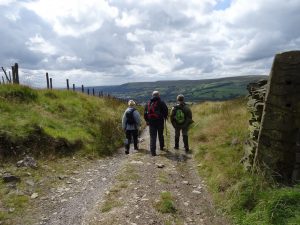 All down hill home