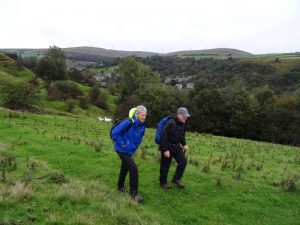 Heading out of Walsden

This walk started at Walsden Railway Station on a dry but overcast morning with only five walkers venturing out after a poor weather forecast. We made our way across Rochdale Road, passing what used to be Grandma Pollards Fish and Chip Shop which has now closed due to the owner’s retirement. Turning into Alma Street we first crossed over the Rochdale Canal then over the bridge spanning the River Calder before climbing up to Top’Th’Hill Road, where we replaced two of our West Pennine Way (WPW) link route way-markers. 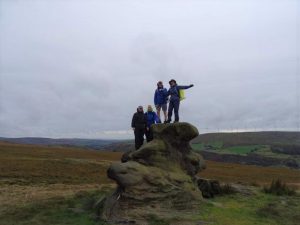 Once on the moors we climbed up to the Pennine Bridleway, which we crossed and turned right up to Basin Rock. The rock is natural weathered millstone grit in the shape of a mushroom, but it gets its name from a basin in the top. The site was once used by itinerant preachers such as John Wesley.

The next place of interest was Gaddings Dam were we had a good view of Stoodley Pike and the chilly waters across to the beach. The dam is said to be the highest beach in England and has attracted tourists since Victorian times. 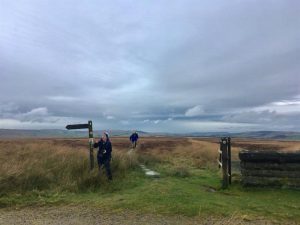 The walk from the dam to the Pennine Way, across the very wet moor, is made easier by the stone paving flags that have been laid on the route and we soon arrived at the sign post for the Pennine Way. 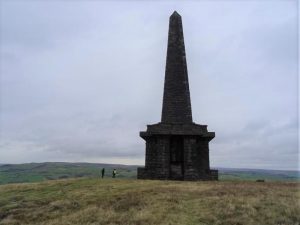 Turning left we headed for Stoodlley Pike which we could see in the distance with just the wet moorland to cross. The first pike was built in 1815 to commemorate the defeat of Napoleon but it collapsed in 1854 being replaced by the present building in 1856. There are 39 steps up to the first level but as we had not brought torches we did not venture into the dark interior.

From the pike we continued for a short distance along the Pennine Way before turning right into Panicle Lane where we headed for Hebden Bridge, first descending through Crow Nest Wood and then crossing the three bridges over the railway line, the River Calder and the Rochdale Canal. By this time, it had started raining so we decided to find shelter under the trees to eat our lunch a park opposite a café called Café On’t Front, without a beach insight.

After lunch we walked the short distance to the railway station where we caught the train back to Walsden having covered 9 miles over less familiar footpaths.