Fourteen walkers, including two new to the group, left Greenmount Old School on a mild October morning and made our way down Brandlesholme Road and through the fields onto Hazel Hall Lane, passed the Tennis Club and into Summerseat. Once in Summerseat we turned left into Robbin Lane and headed towards Ramsbottom. All around we could see the first signs of Autumn from the conkers on the ground to the oranges and reds of the leaves on the trees. The footpaths were free from mud and so we quickly arrived at Nuttall Park, Ramsbottom, where we crossed Bury New Road into Kenyon Street and headed for the footpath at the end of the street. Here we saw that the old soap works was now being demolished, no doubt to build more houses. 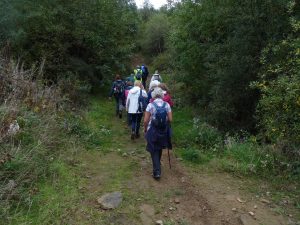 We then followed the footpath through the fields turning right into Leaches Road passing The Paddock Campsite where there was evidence that some hardy souls were still enjoying sleeping under the stars. Once over the motorway bridge we crossed Whalley Road turning right into Church Road and followed a track up to Anthony Fold and onto Bamford Road it was here that we started the steep climb which we had been promised at the start of the walk. The top of the climb brought us to the back of Fletcher Bank Quarry where we stopped for a well-earned coffee break enjoying the glorious views over Turn Village and across to Scout Moor. 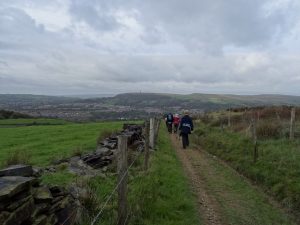 Peel Tower in the distance

Once refreshed we walked along a track that took us onto Bury Old Road which soon became a cobbled road that we followed until we could see the village of Nangreaves in the distance. Just before reaching the village we turned right over a sitle and onto a footpath that took us passed Bast House and to the A56 which we crossed and turned right into Bass Lane. Thankfully there is a footpath near the top of the lane which we turned onto thus avoiding the traffic. 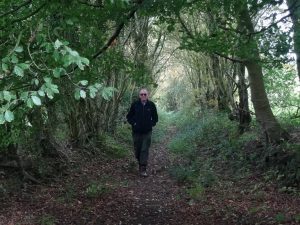