Eleven walkers left Greenmount Old School on a warm sunny morning, for a change, and made our way towards Greenmount Golf Club. At the gate, leading into the golf course, we turned right along a path which leads to Holhouse Farm and the site of the first Greenmount Sunday School. The school was located in a glen called Holhouse and consisted of a square building with a courtyard at the front. The school was called Providence Sunday School and opened in May 1844 with a total of 198 scholars and teachers.

On reaching Bolton Road we crossed into Redisher Lane and made our way to Redisher Woods. There was little sign of Spring in the woods as we crossed over the second bridge and followed the path leading up to the ridge. However, as we reached the top of The Ridge we were greeted by the sounds of a woodpecker and curlew and on our right the sight of a lapwing.

We continued along the ridge crossing the route of the West Pennine Way and following a path on our left that dropped into the site of Bottoms and Cinder Hill Mill, recently excavated by Holcombe Heritage Group. The hill was created by the cinder waste from the mill and has now been reclaimed by nature. Once across the bridge, which crosses Red Brook, we climbed out of the valley and joined a path leading to Holcombe Hay Farm and Roger Worthington’s grave where we stopped for our morning coffee.

Roger Worthington, was a nonconformist, who is buried in the corner of a field at Holcombe Hey. He devoted his life to the Baptist ministry in the district, after he left the Presbyterian Church, he died in 1709. 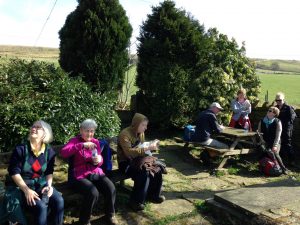 After coffee, in bright sunshine, we made our way down Hawkshaw Lane as far as Boardman’s Farm where we stopped to admire the buildings in this little hamlet. Boardman’s was once a combined Public House and Farm, being known as Peel’s Arms, and was used by the men who worked in the local quarries and mines in the area. The building was built in 1783 along with a dozen cottages. Boardman’s was also the home, in the 1930s, of local rambler, philosopher and poet Ralph Rooney. His book, The Story of My Life, was first published in 1947 and re-published in 2011 by the Greenmount Village Community Group and copies are still available.. 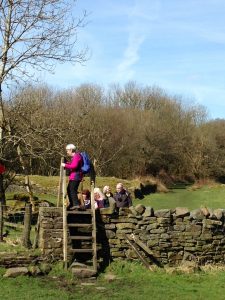 At the bottom of the lane we crossed Bolton Road, again, and headed passed the tennis club towards Two Brooks Valley following the steam to the site of Bottoms Mill where we turned left and climbed up to Holly Mount and stopped to enjoy the views across the valley. The orchard was originally planted by the nuns of the convent in the early 1900s, but like too many traditional orchards across England, Holly Mount Orchard was neglected. Over the past few years, with the support of Incredible Edible Ramsbottom, there has been a restoration project, returning the orchard to its former glory and making its fruit available for the community.

From here we made our way back to Greenmount having covered a distance of 5.5 miles.