The weather was perfect for a walk that included talks about the myths and legends on Holcombe Moor as there was a fine drizzle and low cloud. Nine walkers left the Hare & Hounds Pub, Holcombe Brook, and made the steep climb up to the top of Holcombe Hill where we were greeted at Peel Tower by the local historian John Ireland. 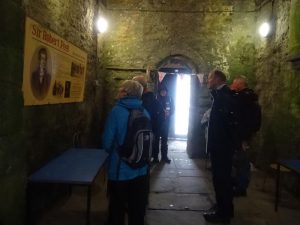 Stories of the Tower

As we had borrowed the key to the tower we were able to escape the inclement weather whilst we listened to John’s tales of fact and mystery about the area. These included, the delay of the dignitaries for the opening event in 1852 which meant that the crowds were descending the hill by the time they arrived and the history of Sir Robert Peel himself with a brief outline of his achievements such as founding the Police Force and the repeal of the Corn Laws. He also told us stories of the ghosts of Roman Legions being seen on Holcombe Moor and the mysterious tale of the death of the stone mason shortly after carving the words on Pilgrims Cross.

Back out onto the moor the weather had not improved as we made our way over Harcles Hill to Pilgrims Cross for a coffee stop and more tales of how the cross had to be replaced in 1902 after being vandalised in the previous year. It is thought that the original cross dates back to at least 1176 when pilgrims used the route on their way to Whalley Abbey.

From the cross we followed the West Pennine Way markers around Bull Hill down to Ellen’s Cairn where there is a stone and cairn at the place where Ellen Strange was murdered in 1761. It was first thought that she was killed by a travelling pedlar, with whom she was having an affair, but later historians believe she was murdered by her husband, no one was ever convicted for her murder.

Dropping further down the moor we made our way to Robin Hood’s Well an ancient well also on the pilgrim’s route to Whalley Abbey. Climbing back up onto the moor we followed a footpath to the left of a stone wall which took us around the back of Bull Hill with the intention of going to John Turner’s Cave, another local eccentric, however, at this point the weather had detreated so we headed down to Red Brook. 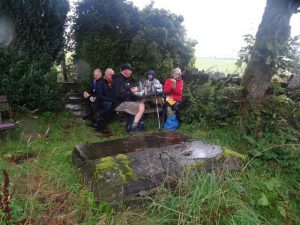 Once across the brook we walked along a footpath that eventually dropped down onto the top of Crowthorn Road. We then climbed over a stile, directly opposite, and joined a track that took us down onto Hawkshaw Road where we turned right and headed for Rodger Worthington’s Grave and lunch. Over lunch we heard tales of Rodger Worthington who was born into a Roman Catholic family who disinherited him when he converted to the Protestant faith and he spent the rest of his life as a roving preacher in this area. The old tombstone was place here in 1709 but the new stone and the surrounding wall was added, in 1936, due to the effort of another local legend, Ralph Rooney. 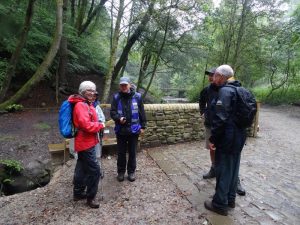 After lunch we headed down Hawkshaw Lane, past Boardman’s Farm, home to the late Ralph Rooney. We tuned left at Higher House Farm and walked past The Range House and followed the footpath into Redisher Wood where we turned right past Simon’s Lodge and back to Holcombe Brook having covered 10 historic miles.