This walk is the third of four walks tracing a possible route that Saxon Monks may have taken between Whalley Abbey and Manchester Cathedral. Greenmount Village Walking Group have been involved in creating this countryside route which is described in detail in a recently published book, written by one of our walk leaders, Christine Taylor, entitled, Pilgrims’ Way from Whalley to Lichfield and the mystery of Pilgrims’ Cross. Produced by Holcombe Moor Heritage Group, see our website for more details on how to buy a copy.

We started our walk from Greenmount on a dull overcast morning with the forecast of rain later. Ten pilgrims made the two mile walk to the point, in Hawkshaw, where we ended the second section of the route in September, we started by making the steep climb from Two Brooks Farm up to Turton Road. 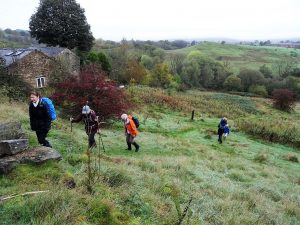 After crossing the road, we joined the cobbled path, known as Black Lane, which comes out onto Watling Street, the Roman Road from Manchester to Ribchester. From here we made the short walk up to the village cross which is thought to have been a pilgrim way marker in Saxon times and where an eleventh member of our walking group joined us. 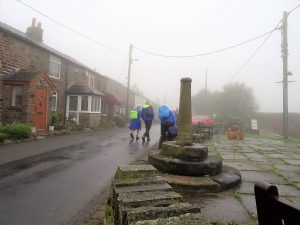 Leaving the cross we walked down Watling Street to its junction with Tottington Road and joined a track on our left called Bowstone Hill Road. The track eventually becoming a series of footpaths which eventually come out at Old Holts Farm, on Harwood Road. At the side of the farm, we made our way across very wet fields and paths eventually arriving in the village of Ainsworth or using its Roman name Cockey. Evidence of Roman remains in the village date back to 79AD, an eventful year for the Romans as back in Pompeii Mount Vesuvius was erupting. As by now the rain had arrived, we took shelter under the lychgate of The Parish Church of Christ in Cockey otherwise Ainsworth (1515). 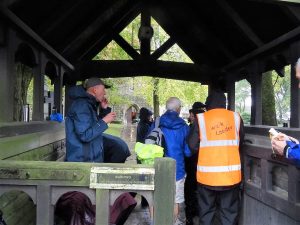 Coffee in the Lychgate

From the church we walked a short distance down to Bradley Fold Road joining a footpath on our left that took us down to Starling Road which we crossed taking a footpath leading to Bury Bolton Road which we also crossed and headed for Withins Reservoir. 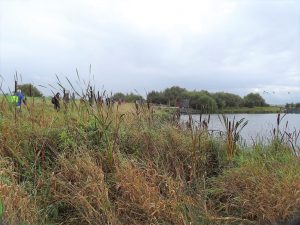 At this point a twelth member of our group joined us for the final section of the walk into Radcliffe passing The Old Cross pub, on the site of the Saxon Cross and the Old Tithe Barn, which is now an M.O.T centre. When we finally arrived at St Mary’s Church it was raining so hard that we decided to view the ruins of Radcliffe Tower on the next section of the pilgrimage. 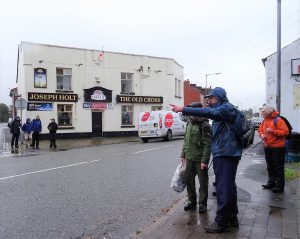