Undeterred by the bad weather!

20 sheets each containing the 24 images of objects, letters or parts of signage were ready, plus copies of the Quiz, but o dear not the weather! It wasn’t just pouring down it was lashing it down.

Well done to all 12 people for coming, 9 participants and 3 leaders! It was plaintively clear, after only a short distance, that the competitions should be abandoned and to do just the walk, to which everyone whole heartedly agreed. 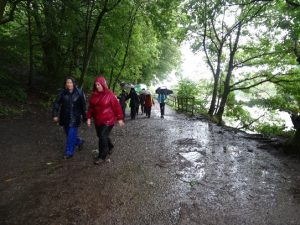 We continued on the West Pennine Way from the Jumbles café car park towards Turton Tower, passing the gate to the fossilized tree and the World War II Pill Box.

Turton Tower is a grade 1 listed building, set in attractive woodlands and gardens, built around 1420 as a two storey stone Pele tower, over time it has been extensively altered and was given to the public in 1929 and now belongs to Blackburn and Darwen council.  It is open to the public and has a tea Room. 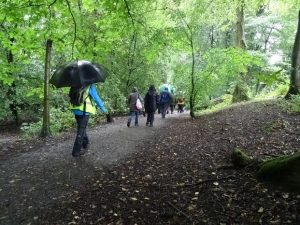 Through the grounds of Turton Tower we were sheltered slightly by the over- hanging trees and bushes as we made our way to the ancient village of Chapeltown stopping there to admire the Old School building, the village cross and stocks before passing down the side of St. Anne’s Church to Turton Bottoms. 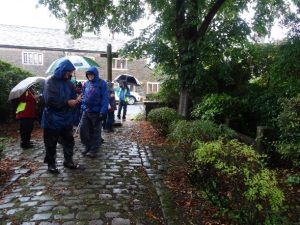 This whole area has many connections with the Humphrey Chetham, responsible for the creation of Chetham’s Hospital and Chetham’s Library, the oldest library in the English-speaking world.

From here we followed the brook back to the Jumbles Reservoir where we stopped under a tree near the main bridge to complete the ‘feed- back form’. We were more than pleased that everyone said they had enjoyed the walk, the company, landscape, local information and a new route.  The only fault being the weather.