This walk was also part of The South Pennines Walking Festival

Musden Head Farm before the rain

We began the walk at Clough Head Information Centre and Café on a bright chilly Autumn morning with the threat of rain later. Seven walkers started the walk, with two new members joining us as a response to the South Pennine Walk & Ride Festival leaflet.  Once on the West Pennine Way (WPW), which passes behind the café, we headed towards Jamestone’s disused quarry and onto Ley End Farm where we crossed the Grane Road and made our way to Holden Wood Reservoir. From the reservoir embankment we climbed the steep path that was once the tramway used to bring stone down from Musbury Heights Quarry, which closed in the 1920s. At the top of the tramway the ruins of the fulling mill, including the chimney which was recently rebuilt, can be clearly seen along with views across the Grane Valley and over to Haslingden.

Continuing to follow the WPW we walked around the side of Musbury Heights with views of the ruins of Musden Head Farm to our right. 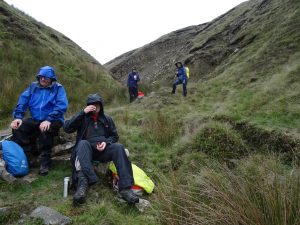 At this point on the walk we became aware of the rain clouds forming overhead and decided to look for a suitable place for lunch. Unfortunately, the rain arrived before we stopped for lunch in the attractive valley through which follows Long Grain Water. 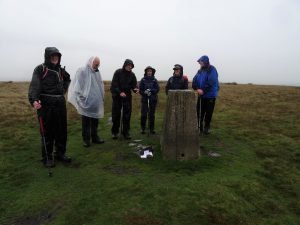 After a very wet lunch we climbed over Burnt Hill and headed for Alden Ratches, by which time it was raining very heavily and visibility was limited. Bull Hill was our next climb and we were able to reach the trig point as the red flags were not flying, which is an indicator that Holcombe Rifle Range is not being used for shooting practice.

At this point we left the WPW and joined the start of the Link Route to The Pennine Way and descended down the path as far as Robin Hood’s Well where we left the Route and continued down the track to Helmshore.

Once in Helmshore we joined the Route 6 Cycle Route that passes behind Helmshore Textile Musem which was one of the first fulling mills to be powered by water power, and is well worth a visit. At Holden Antiques we re-crossed the Grane Road and headed up onto Haslingden Moor and through Mary’s Wood, which was planted in memory of a local farmer’s wife. 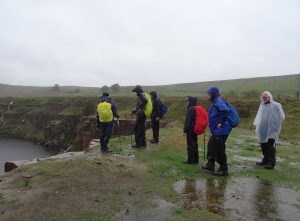 Our final point of interest on the walk was Troy Quarry which is a spectacular example of how nature can reclaim the ruins left by industrialisation. From the quarry we returned to Clough Head Café, later than anticipated due to the pace of one of our new walkers, only to find that it had closed for the day making the very wet 13.5 miles seem even longer